Judge Vs Water Tour and Giveaway!

With a splash, fifty years of lies were revealed. Join Fiona Gavelle, lawyer and part time sleuth in solving the mystery. Meet her unusual clients and visit Chicago, Illinois without leaving the warmth of your Kindle. Disclaimer, this book does not include any car chases, no one runs down a dark alley at midnight and no one has a locker at the bus station.. 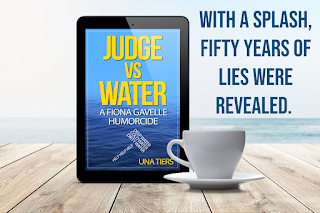 The woman stared at me. "Mildred isn’t here, did you say she made an appointment to see me?"
"Yes."
She shook her head and formed a grim smile in annoyance, examining me closely for complicit behavior.
"Mildred Shoe is your attorney, right?" I asked.
Before she answered, our attention was drawn to a ‘plop tap’ sound. It was getting louder while maintaining a consistent rhythm. Turning, we saw Mildred, running in heels. Her pearls were swinging from side to side while she clutched her briefcase to her bosom.
Halfway up the stairs, she stopped to catch her breath. Maybe it was to garner sympathy or to measure how much of her treacherous behavior had been exposed. Gingerly, she walked up to the porch, still huffing and puffing. Her eyes darted again from the woman standing in the doorway to me and she smiled weakly.
We glared at Mildred to be certain she got the point that we felt like pawns.
"Mother, Fiona, I can explain.

Una Tiers (nom de plume) is an avid reader, attorney and independent author in the Chicago area. Her early reading enthusiasm exhausted her grammar school library and she was introduced to the magnificence of the downtown Chicago Public Library. Years later, she had the honor to take writing classes with Harry Mark Petrakis, downing a bowl of cheddar chowder after class.

Over the years, creative writing took a backseat to drafting legal documents. After one particularly brutal day in court, Una wrote a story murdering the problem judge (on paper). Feeling better, she returned to work. Adding additional victims proved to be a stress reliever making Una smile. The story grew into Judge vs Nuts.

Una has several novels and novellas. I encourage you to take a chance. You will be entertained and surreptitiously educated to the law as it is in probate.

When she is not murdering people (on paper) Una has a scratch and sniff garden, including chocolate mint, dill, lavender, rosemary and cilantro. In 2018, she planted a Hyacinth bean and is waiting for the promises on the packet.

The next full length novel, Judge vs. Michigan, takes you on a dinner cruise from Navy Pier. Can you swim?