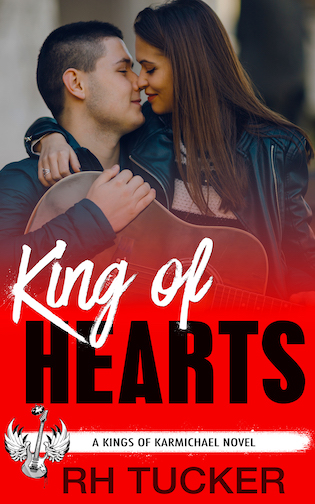 
Derrik Tyler has it all. He’s a world-famous rock star with a legion of adoring fans and has obtained teen idol status. He even has a Hollywood starlet who wants nothing more than to be the only girl in his life. It’s a publicity stunt only his band knows about, but that’s not detracting her from trying to turn their fake relationship into a real one. Yep, he has it all. Except the girl who stole his heart before his life turned into a rock n’ roll rollercoaster.
Zoey Jacobs has been friends with Derrik and the Kings of Karmichael, since before they became the hottest band in the world. She even dated Derrik before he was known as the King of Hearts—the biggest teen heartthrob in the last decade. But that’s all in the past. She’s just a few short months away from graduating high school and moving on to college.
When spring break rolls around, Derrik invites Zoey along for the last leg of the band’s tour. What should be an amazing road trip turns into Derrik’s personal mission to win back his first love. But can two people from different worlds reignite a past relationship, or is a teen icon and a future college freshman too big of a gap to cross?
King of Hearts is the first book in the Kings of Karmichael series. The series is interconnected, but each book can be read as a standalone.

Author Bio:
RH Tucker writes cute & edgy YA romance. He also lives in Southern California, consumes too much caffeine, eats too much pizza, and firmly believes Rocky Road is the best flavor of ice cream.
You can sign up for my newsletter for previews, excerpts, and short stories at:
https://www.subscribepage.com/rhtuckernewsletter