Fangs For Nothing #Review #Audio 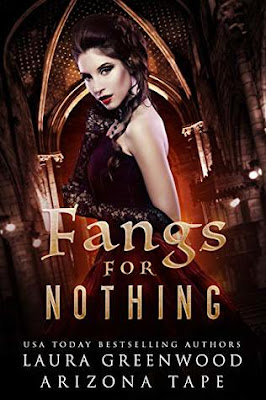 When vampire, Lucy, is finally hired to do some proper private investigating, she uncovers a plot far deeper than she expected...and far more dangerous. If she doesn't figure it out, vampires as a species could end up exposed. That's if she doesn't accidentally reveal them first.

And as if going on a date wasn't stressful enough, Lucy's Noble fiancé has made a reappearance, and he's brought a rather distasteful present with him.
-
Fangs For Nothing is a paranormal reverse harem set in the Twin Souls Universe.

IN THE SERIES:
#1 Fangs For Nothing
#2 What The Fangs
Goodreads | Amazon UK | Amazon US

New paranormal audiobook. Fangs for Nothing is a mystery vampire series. This is the first book. We have a few pieces coming together but there is hint of more to the story in future books.

Vampire, Lucy is almost engaged but waiting to commit. When a new case falls at her feet she finds there may be more to her family than she realised, which includes her husband to be. A cat turns up on her doorstep which is only the first part of the puzzle. Lucy must get her head around the strange events before she can work out how she wants to spend her future.

The narrator for this book has done a few of Laura greenwood and Arizona Tapes books. She’s good and has a nice accent.

I enjoyed this book.