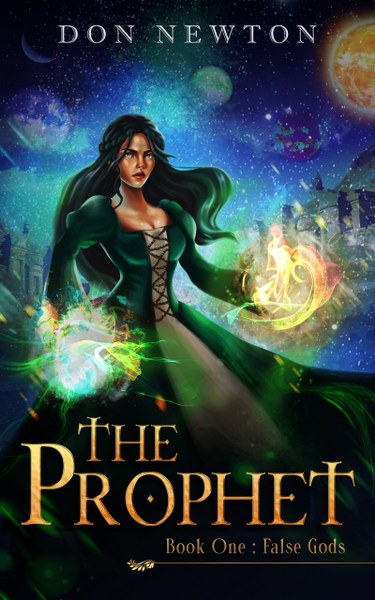 How many gods do you really need? Erador has more than its share…

In a strange multiverse ruled by magic and immortals, the last remaining souls, fleeing the destruction of Earth, struggle to survive. The Draggons want them dead. The gods want more power. But the humans want to live, and there’s only one sorceress who can make that happen. The fate of humanity is in her hands – so, no pressure…

The Civil War fractured their world, and the gods just made it worse. Now their followers are split into four separate factions, and they all hate each other. Riots and bombings force further divisions among them, and the leaders are at a loss about what to do. Most of them, anyway.

Alisha Callus rose through the sorceress ranks, mastering the Orphic currents and learning to bend space and reality to her will. Now, she’s the last Adeptus Supreme on Erador, and she has to kill a god. But she’s not sure she can.

But sometimes, they deserve it.

Can one Sorceress, two Draggons, four warriors, and a god crush this evil influence from existence? Follow this ragtag band of heroes on an epic quest to free their world from an immortal’s vicious grasp. Who knows, they might do it… 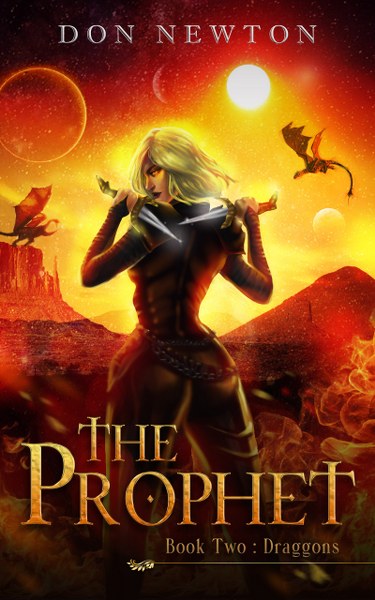 The false god, Zaril, died in a blazing bolt of light, victim to the wrath of an Adeptus Supreme. Now, it’s Kat’s turn for some payback. All she can see through the red tinge of hate that fills her eyes is the face of her lover’s killer. The fact that he’s also her father barely weighs on her mind. He chose his side, and now he’ll pay for his decision. 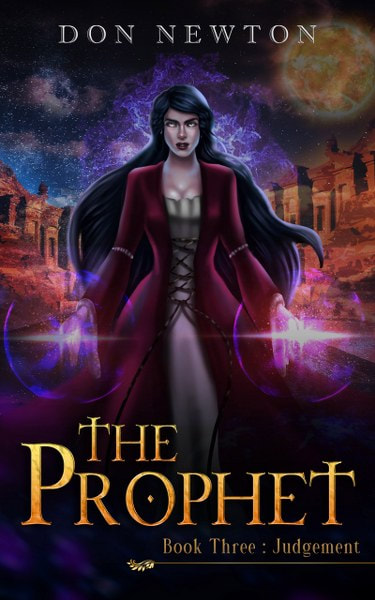 The Draggon King, Darkonus, died at the hands of his daughter - the cold steel of her dagger taking his life, and the void-wraith trapped within sucking his soul away. Now Kat has ascended to the Draggon throne and become their Queen. 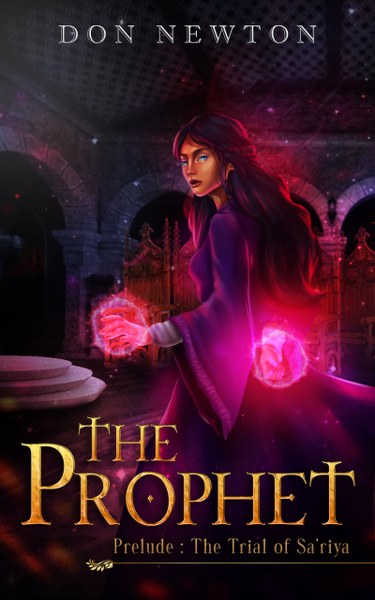 The Trial of Sa'riya
Prelude to The Prophet Trilogy

The war with the Draggons is raging, and only the battle-hardened Na’Geena warriors can stand against them. They have the weapons that can kill them, and the Griffins they ride are the mortal enemies of the lizards. There’s a chance they could be defeated, but they have allies in the Eradorians, and a secret mission could turn the tide and destroy the Draggon King. Only a god can make it work. But will he help?

Ok, her twin sister was killed, but it was an accident…

When the Carolonian sun exploded, Zi’anna was caught in the blast-wave, and even her immortality and the powers of the K’Pa couldn’t save her from certain death. Now, the immortal’s Elder Council wants her sister, Sa’riya, to pay for that loss, with her life… But not all of them…

Follow along as the trial unfolds. Will they find her guilty? Would you?

“When you know the right question to ask, the answer will be obvious.” - Yin, The positive aspect

The southern face of Krasus Cauldron was aglow with the reddish-tinged light of the morning suns: the red sun now peering above the horizon, following the yellow on its daily trek across the sky. Darryl stood at the edge of the rock ledge flanked by two Griffins, pointing the tip of Sinreaver at the two Draggons in front of him. The Draggons looked at the sword and Griffin claws and froze. “That’s wise.” Darryl grinned. “Carion, Shera, if they move, kill them.” The Griffins made a trilling sound and took one step toward the Draggons, their heads down and the tips of their wings trembling in anticipation. The Draggons backed up. Darryl turned to check on his brother’s progress with the Council guard. Karl raised Bloodrender above his left shoulder and swung down hard; the blade carved a sharp flashing arc through the air—stray drops of Draggonfire flying from the edge. The Draggon tried to dodge, but the tip of the sword cut a flaming gash across its right thigh—roaring in pain, the fire in its eyes intensified, focusing on the Na’Geena Chieftain. The Draggon made the mistake of breathing fire upon the sword: it was legendary, and all the Draggons knew what it could do. Bloodrender was dangerous even when it wasn’t on fire; all three of the Na’Geena swords were: they might absorb and redirect Draggonfire, but they were also one of only three things which could cut Draggonskin. The beast circled Karl, limping to his left, trying to find an opening in the Chieftain’s defense—there was none. “You’ll let me inside this Council chamber,” Karl growled at the Draggon, “or I’ll go through you.” The Draggon shifted into its human form: the scales and teeth and the twenty-foot lizard body morphing into a young man grimacing in pain. He clutched the bleeding-smoldering gash on his leg and shook his head at Karl. “Markus would kill me, or Darkonus…” “I could kill you right now,” Karl said, “and save them the trouble if you like, but I’m still going inside.” The Draggon limped to the cliff wall and leaned against it, waving Karl past with one hand. “Be my guest…”
Karl glanced at Darryl. “Don’t worry.” Darryl pointed toward the archway carved into the side of the mountain. “I have this covered, go. These Draggons are right where I want them.” Karl sheathed Bloodrender and stepped through the arch. The pain made him scream. It felt like he was being pulled apart one molecule at a time: fire ran through his veins and nerves, through every muscle fiber, burning all the connections. The reverse was true on the other side where his atoms smashed together again, reforming the burned and ripped apart body into a whole once more. He wound up on his knees on hard black granite, his hands clutching his chest, out of wind and half-dazed; smoke belched from his lungs when he finally caught a breath. “Humans really shouldn’t use that…” He looked at Nu’reen as his vision cleared; she had a look of mild concern on her face. Sa’riya ran to him and picked him up from the floor, her hands on his cheeks pulling his face to hers. “Are you Ok?” Karl shook the cobwebs from his head and threw his arms around her. “I’m fine, or I will be.” “You shouldn’t be here.” Darkonus stepped toward him. Karl drew Bloodrender and aimed it at him—the blade still burned with Draggonfire: drops of it fell from the edge, igniting the stone where they landed—sizzling plumes of molten granite rising into the air between them. “Ok, maybe we can overlook this…” The Draggon stepped back and took his seat. “What gives you the right to abduct my wife?” He faced the Council, examining their faces. “Why shouldn’t I kill you all right now?” “Because it would be ridiculous to believe you could, for one.” Jurak bounced up from his chair. “But, by all means, give it your best.” “Order!” Nu’reen slammed the gavel against the wood and pointed at the D’jinn. “You sit down.” Jurak spun and glared at her. “Don’t speak to me with that tone.” “You’ve all agreed, my decisions are final. Now sit down and shut up!” Nu’reen shifted into a much-older version of herself: gray hair and wrinkled skin, but the silver fire in her eyes grew brighter, and a luminous halo circled her head. The light from the halo ran down and lit her robe,
making it fluoresce in the dim light of the Council chamber. “Is this better Jurak? Do you accept my rulings in this form?” Jurak took his seat and stared at the floor, his arms across his chest. Nu’reen looked at Karl, the softness returning to her face. “Sa’riya, take him out… and explain,” she pointed at the archway, “and then return.” “You can’t let her go!” Markus jumped to his feet and turned on
Nu’reen. “She’s given her word, and that’s all I need.” The silver flame intensified again as she stared at the Draggon, the halo pulsed in time with her breathing. “Are you going to challenge me as well?” Markus looked at Darkonus, who tilted his head to one side and raised his eyebrows. “Not yet…” Markus said. “Well, you let me know when you change your mind.” She banged the gavel. “In the meantime, let’s take a twenty-minute recess until Sa’riya gets back.” 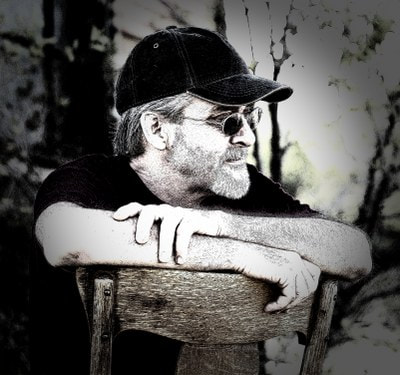 Don Newton is a writer and armchair philosopher, author of the science fantasy trilogy “The Prophet”, and short stories too numerous to count. Don has been in love with science fiction and fantasy his entire life. The first alternate world he created was the result of a sixth-grade essay assignment, and he’s been hooked ever since. That world has grown and transformed into an entire multi-verse of possibilities to explore. Don’s not just a writer though, he has hobbies too: like making up funnier lyrics to popular songs. He sings them to himself when no one’s around—especially in the car. Don has a degree in Nursing and he’s a certified Paramedic. Six years in the Army sent him to places as diverse as Hawaii and Germany, where he was awarded the Army Achievement Medal for conduct above and beyond the call of duty. Having lived in nine different states and two foreign countries, he now calls the desert southwest home.