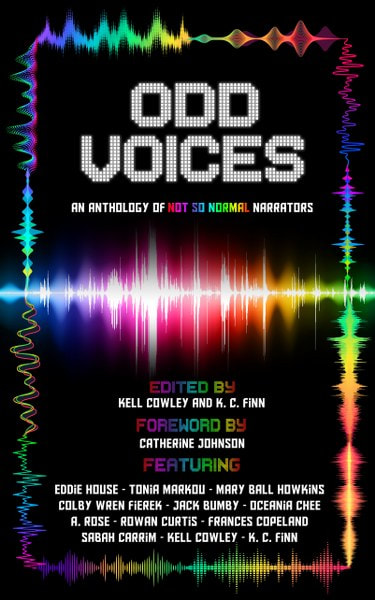 In every new story we pick up, we’re seeking an exciting original voice. So why are there still voices we don’t hear from nearly enough? Why are there characters that so rarely take centre stage? In this collection from Odd Voice Out press, we discover the stories of twelve teenagers who stand out from the crowd and who’ll not easily be forgotten.

With settings that range from Scotland to Syria, Mexico to Mauritius, Africa to Russia, these stories take us to all corners of the globe and into the lives of young people with their own unique circumstances and perspectives. Characters dealing with issues of culture and class, exploring their sexuality and gender identity, or letting us into their experiences with illness, disability or neurodiversity. Their tales span all genres and can’t be reduced to labels. These are stories about bending the rules and breaking the law. Stories of fighting for survival and finding your place in the world. Stories of family solidarity, unlikely friendships and aching first love told by teenagers who don’t always fit in and aren’t often heard.

With a foreword by award winning YA author Catherine Johnson, this anthology brings together the top ten stories of Odd Voice Out’s 2019 Not So Normal Narrators contest, as well as bonus stories from in-house authors Kell Cowley and K.C. Finn. 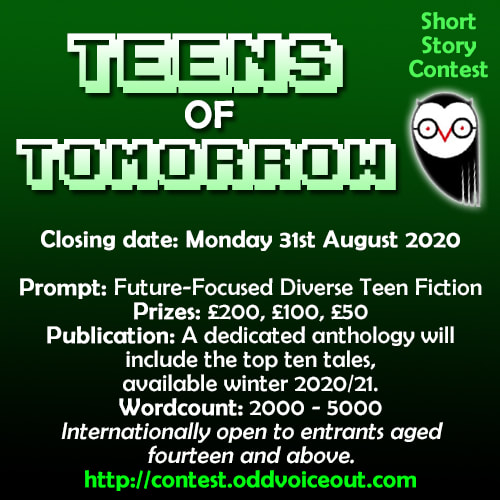 YA Fiction's March into the Future

Internationally open to entrants aged fourteen and above.

We stand at the dawn of a new and uncertain decade. Here at Odd Voice Out press we are calling for short stories that reflect the socio-political issues that young people are dealing with now and will continue to tackle in the coming years. Entries submitted to our Teens of Tomorrow contest can be any genre - fantastical or realistic - and they may be set in the future, the present or even the past, provided that they centre on forward-looking teenage characters grappling with the world around them, the times ahead of them and the roles they personally aspire to play. Send us your utopias, dystopias, protest stories, political thrillers, social satires, climate fiction and prophetic steampunk.

Turn the hashtags trending today into a powerful YA story of tomorrow!

Your short stories with ‘odd voices’ must be written for a YA audience (that’s around 12 to 19 years old), but other than that they may be set in any genre or time period. This means that relevant content which is sexual, violent or contains extreme language will be accepted, provided it is somewhat moderated for a teen audience, rather than for adults (think about movies rated 15, compared to 18).

Our contest is open to writers aged fourteen and over from all nationalities and backgrounds (you should be at least fourteen years old by the closing date for entries). Entries must be no more 5,000 words long and be a minimum of 2000 words. Your entry should not have been previously published, self-published or accepted for publication in print or online, or have won or been highly placed (e.g. shortlisted or semi-finalist) in another competition at any other time. Longlisted stories are acceptable, provided they have not been in print or online in full.

After our closing date of Monday 31st August, we will select ten finalists to feature in an anthology collection that will be made available in ebook and print editions, to be released alongside our usual book range. The winning entry will also receive a £200 cash prize, whilst second and third place will receive £100 and £50 respectively. All ten finalists will also be invited to participate in social media promotions, live events, interviews and broadcasts as per the promotion schedule for the anthology.

To cover prize fees and reading time, there is a small entry fee of £4 per story, payable via PayPal at the time of entering. Authors may enter up to five different stories, but must pay the entry fee for each one as a separate entry and transaction.
Co-authored stories are accepted, up to a maximum of two authors per story, and in the event of winning, authors would share the prize money evenly.

Introduction by Odd Voice Out Publishing


Odd Voice Out press is the brainchild of offbeat YA writers, K.C. Finn and Kell Cowley – two author friends from Chester who decided to go into business together and start their own literary label. They settled on the name Odd Voice Out, partly because the shape of its acronym inspired the cute bespectacled owl logo. But mostly because this name set the tone for the sort of YA fiction they love to read and write. They are dedicated fans of oddball fiction, misfit fiction, stories that are unusual and voices that stand out from the crowd. During their own experience writing for YA publishers, agents and anthology collections over the years, they have been frustrated to find there is still a depressing amount of conforming to standards, the same conventional characters always taking centre-stage and genre tropes that are seldom subverted. And there’s still far too much playing it safe rather than pushing the boundaries, even in a time when readers are demanding greater diversity and own voices in the stories they want to see. So when it came the first short story competition for OVO Press, they wanted to hand the mic to the type of YA protagonists who aren’t often heard. Having received submissions from all over the world, they found writers of all different backgrounds, experience levels and ages – some of them still teenagers themselves. This resulted in the incredible anthology of Odd Voices that's now available worldwide!

Odd Voice Out is an independent literary press, publishing YA and crossover stories filled with unique characters thrown into extraordinary circumstances. Our genre-bending books take contemporary social and political themes and explore them through a range of historical, futuristic, surreal and supernatural settings. Our diverse young heroes are never your typical leading guys and girls, but are flawed insecure misfits struggling with everything from racial and sexual identity, to body issues, disabilities, mental health and worst of all, being teenagers growing up in worlds gone mad.