The Rules of Rebellion ♥ Coming soon! 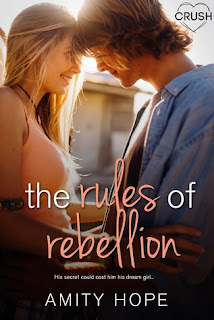 The Rules of Rebellion

Leo Zimmerman has had a crush on his curvy friend Kylie Jenkins since forever, so when he discovers the girl with a flair for candy making has a newfound plan to rebel against her overbearing parents, he’s determined to be the one to help her carry it out. Who better than himself to show her the ropes of letting loose?

Sure, taking her to her first high school party, helping her sneak out of the house, or watching a sunset together isn’t exactly a hardship, but much harder is masking his feelings the more time they spend together. And when he suggests adding “a first date” to Kylie’s plan and she accepts…suddenly all his dreams seem to be coming true.

But Leo’s got a secret that could change everything between them, and it’s only a matter of time before it comes to the surface.

I like Amity Hope's stories. I've read a few now. The rules of rebellion can definitely be read as a standalone. The rules of persuasion is about the main character's sister but it isn't necessary to read it to enjoy this story.

Kylie is feeling a bit left out. Her best friends all have boyfriends and Kylie wants a little more excitement in her life. She always follows the rules and lives on the safe side of the fence. She makes a list of rebellious acts she would like to try but before she can finish it the list goes missing.

Leo has had a crush on Kylie as long as he can remember but doesn't think he's good enough for her to take the risk of losing their friendship. Kylie doesn't have a clue he feels this way. He is in a similar boat with his friends because they all have girlfriends. His family life isn't working out the way he would like. His family are only supportive of the hobbies they want him to do. Leo is a bit of a pushover. He's super nice. Super sweet and cute as a button. He finds Kylie's list and although it will be embarrassing for both of them, he takes a risk and returns it to her. He has a plan to help her reach her goals. This is Leo's shot at getting some one on one time with Kylie.

This is a sweet romance. Kylie pulls all the strings. Leo shows how great he is and the pair gets on really well. This is Kylie's story of getting everything she wants by taking a risk. 4 stars out of 5.

*I received an ARC in exchange for an honest review.
Posted by DanielleDuncan at 08:13