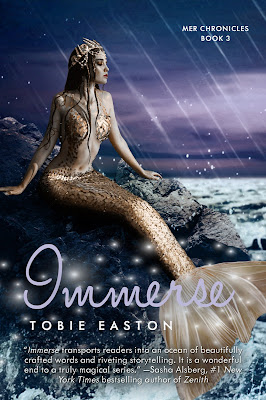 Immerse is the spellbinding and breathless final installment of the Mer Chronicles series where descendants of the Little Mermaid must face deadly magic, shifting alliances, and the dangers of forbidden love.
Lia can’t wait for her parents’ coronation. Now living in the sparkling palace beneath the waves, she sneaks off to Malibu whenever possible to see Clay. Tucked away in an abandoned seaside mansion, Lia and Clay devise a plan to ensure they can stay together forever.
But when an old enemy resurfaces and Lia is restricted to the palace for the safety of all Merkind, she and Clay are ripped apart once more.
She fears not only for Clay, but for her best friend Caspian, who seems to be swimming down a dangerous path. He has invited the conniving Melusine to the coronation ball, convinced she’s capable of change. And no matter how hard Lia fights it, showing up on Caspian’s arm is just the start of Melusine’s insidious return to her life.
With threats Below growing more ominous by the day and a powerful ancient ritual looming, soon the two girls can’t escape each other. As their fates grow increasingly intertwined, Melusine might be the only one who can help Lia find the answers she desperately needs to save everyone she loves and to achieve her happily ever after. But can Lia trust her? 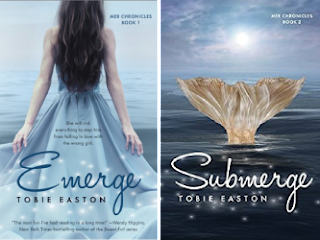 Immerse is the third and final chapter in the Mer Chronicles. I like mythical romance stories and I’ve enjoyed this series. This is a continuous story and although book 3 contains catch up information I would not recommend it as a standalone. Immerse is slow off the mark as it begins and I think this is due to the background refresher. I read the previous books last year so I liked having the catch-up, but I thought there was a little too much. Lia and Melusine are emery’s but they both want what is outside the Mer laws. Lia’s boyfriend is a human and the only reason the mermaids were saved. The law says a human cannot know about mermaids. They wipe Clay's memories, but their bond is too strong. Now Clay wants to be like Lia. They want forever after together. Melusine is hurting from her father's mistake. She is not under arrest herself but has to live by strict rules. She hates the life she is living and everyone in it.Caspian is Lia’s best-friend but after everything that went down, he needs some space. He knows there is more to Melusine than she lets people see. He is drawn to her like a moth to a flame. The hate in her heart is strong, but Caspian surprises her at every step.This is the final chapter but can everyone get what they want? With mythology and legends can the Mer chronicles find a happy ending for everyone. I’ve enjoyed this series. I’m sad this is the last book and will be looking for more from this author. The ending fitted perfectly and I was hooked to every last page. I’ve joined the blog tour and received an ARC in exchange for an honest review. #mystery #suspense #fantasy #legend #mythology #romance A fabulous # combination.

Award-winning author Tobie Easton was born and raised in Los Angeles, California, where she's grown from a little girl who dreamed about magic to a twenty-something who writes about it. Her debut novel, Emerge, is a Gold Medal Winner (Young Adult – Sci-Fi/Fantasy) of the Moonbeam Children’s Book Awards and is Book 1 in the acclaimed Mer Chronicles series. The trilogy follows the descendants of the Little Mermaid and offers fans a peek into a world where Mermaids aren't just real, but live secretly among us on land.
She and her very kissable husband enjoy traveling the globe and fostering packs of rescue puppies. Tobie loves chocolate chip cookies and Oxford commas. A summa cum laude graduate of the University of Southern California, Tobie splits her time between Los Angeles and Boston.
Learn more about Tobie and her upcoming books on www.TobieEaston.com.