A Pack of Blood and Lies #Review #Amazing 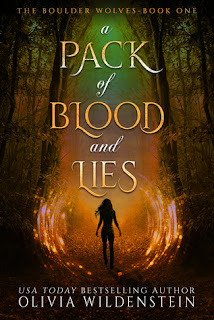 A Pack of Blood and Lies

The primal rule of winning: don’t fall in love with the contender. Three months shy of her eighteenth birthday, Ness is forced to return to Colorado. Even though it’s been six years, and the wolves of her all-male pack don’t recognize her, she recognizes them. People who shun others because of their gender are hard to forget.Especially Liam Kolane—son of Heath, the crudest and cruelest Alpha to have ruled the Boulder Pack. Liam is as handsome as he is infuriating, as kind as he is punishing, and he makes Ness’s traitorous heart race, which isn’t good. After all, he’s a Kolane. Like father like son, right?When Heath dies, Liam vies to become the new Alpha and no one dares challenge him. Except Ness. Thus begins a treacherous game. The rules: winner takes all…including loser’s life.Fans of Kresley Cole and Cassandra Clare will devour A PACK OF BLOOD AND LIES.

A pack of Blood and lies was soooo good! When I first started reading this story we got off to a bit of a rocky start but a couple of pages in and I was totally hooked! I can’t wait for more! This is a full-length story with no cliffhanger but the author has promised more.
Ness is a pack outlaw. Her mother was forced to leave with her and start a new life in LA. They were getting by but life was great. At seventeen, Ness’s mums dies and her now guardians turn up to take her back to the life she thought was behind her. While in LA Ness had found her own family and doesn’t want to go back but she has no choice. The old pack leader was an evil wolf and luckily has passed away. Now the pack are wanting a new leader. The son of the old alpha is at the top of the list but Ness doesn’t want the pack to fall into the same routine.
Liam is the old alpha’s son. He’s gorgeous but Ness can’t forget what his father did. People keep telling her he’s different but she struggles to believe. Ness wants the pack to change for the better and finds herself volunteering as a candidate for alpha. No one is impressed but Ness is strong-willed.
The trials for alpha are not for the weak. A leader will be elected at the end. New friendships will be made, mysteries will unfold and Ness may just get her change. Everything isn’t as it seems and this story has a slow burn romance. I absolutely loved every minute.
5+ stars out of 5. I want more more more! *I received an ARC in exchange for an honest review. This book did not disappoint.
Posted by DanielleDuncan at 08:01