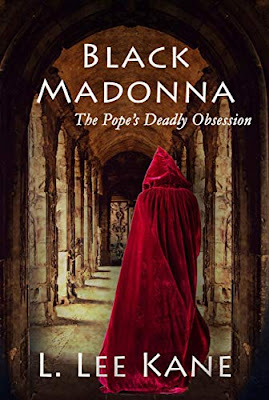 About the Book Luci de Foix was nine when her parents were killed in a car accident. But was it an accident? Unb
eknownst to Luci, a group known as The Order, under the protection of the Pope, has been watching her family for many years, waiting for the day that a diary written in the thirteenth century would be delivered to her family-a journal that contains a key to a lost codex-and they would do anything to get it. Early one morning, when Luci is twenty-nine, a bloodied young man delivers a book, claiming it’s from her late grandparents. Plagued by panic attacks that have left her crippled, Luci struggles to overcome her fears, avenge the death of their family, and search for the lost codex. But who can she trust? Everyone seems intent on betraying her, even the gorgeous, enigmatic Max, a man with secrets of his own.

Black Madonna is now available to purchase on Amazon, iTunes, KOBO, and Barnes and Noble.

Question One: What was your inspiration for the story?

I primarily read historical books, and I came across a religion called the Cathars. I had never heard of them and didn’t even know how to pronounce the name correctly.
I began researching the group and found that they were way ahead of their time. They didn’t believe
in tithing, which sent Pope Innocent III into sending his Knights out to find them. Then I discovered women could be Prefects (leaders) of
their religion, and they were also vegetarians. The Cathars were way ahead of their time, and it intrigued me.
When the Popes Bishops and Teutonic Knights went into one of the French towns that protected the Cathars one of the
soldiers came up to Bishop Aleric and asked who do we kill? In that town there were
Cathars, Catholics, and Jews. The Bishop answered, “kill every last one of them, God will know his own."
When I found out that the Pope had made it his mission to kill every last one of the Cathars in France. I was hooked into finding out more information about the Cathars, their way of life, and what really did happen to them.

Luci de Foix is my protagonist, and after her parents were murdered, she was placed in a Catholic Orphanage where she began to have panic attacks.
She grows up, goes to college and becomes an archeologist. A diary written in the 13th century by her Luci's relative, Esclarmonde is
discovered and given to her. It is Luci's mission to find Solomon’s ring, find the last words of
Mary Magdalene, and restore the Cathar faith. A fringe group of Catholics within the Vatican are out to find the same thing, and they will stop at
nothing to get it…even murder.

Question Three: Who would you recommend your book to?

I believe anyone who likes Historical Fiction would really enjoy the battle scenes, the love scenes, the thrilling adventure of new discoveries, and visiting
historical countries that hide long, lost secrets.

Question Four: What was your inspiration for the book title?

In France, Mary Magdalene is called The Black Madonna. A friend of mine who visited Tuscany, Italy gave me a small statue of her.
Question Five: What can we expect next? Do you have anything in the pipeline?

Thank you for asking. Luci de Foix will be seeking a lost civilization that originated in Helike, Greece. The country was lost because of a volcano eruption. Those that survived sailed away to South America where they created a secret civilization. Many adventurers have tried to find the Lost City of Gold but died trying. Luci is 'encouraged' to find the city but finds something more important than the gold the kidnappers want, something miraculous that will save mankind. 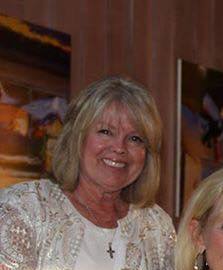 About Linda Lee Kane Linda Lee Kane is an author of fantasies, thrillers, and contemporary fiction works. She is the author of Death on the Vine, Chilled to the Bones and an upcoming re-release of the The Black Madonna. She lives with her husband, three dogs, one bird, and eight horses in California. "Whether I am writing for adults or children, the war between my days and nights is reflected in my books. Although the tendency to acknowledge the light and dark sides of life is often disguised in my work, it's always there, lurking just out of sight."
You may find the author on her:
website: https://www.lindaleekane.com/
Twitter at @llkane2152.
You may also follow her on Amazon/ Amazon UK and GoodReads.

-- Blog Tour Dates
April 1st @ The Muffin
What goes better in the morning than a muffin? Come by today and celebrate the launch of Linda Lee Kane's book Black Madonna: A Pope's Deadly Obession. Read an interview with the author and also enter to win a copy of the book.
http://muffin.wow-womenonwriting.com.

April 2nd @ Break Even Books
Make sure you visit Erik's blog today where you can catch Linda Lee Kane's blog post about heroes and villains.
https://breakevenbooks.com/

April 5th @ Words from the Heart
Stop by Rev. Linda Neas blog where you can read Linda Lee Kane's blog post about heroes and villains.
https://contemplativeed.blogspot.com/

April 12th @ Bookworm Blog
Stop by Anjanette's bookworm blog where you can read author Linda Lee Kane's post about creating suspense. Plus, be sure to check out the interview with the author as well!
http://bookworm66.wordpress.com

April 13th @ Chapters Through Life
Visit Danielle's blog where you can read her interview with author Linda Lee Kane and hear more about this interesting writer!
https://chaptersthroughlife.blogspot.com/

April 24th @ Bring on Lemons
Stop by Crystal's blog today where you can read her review of this exciting historical fiction book, Black Madonna. http://bringonlemons.blogspot.com/

April 25th @ To Write or Not to Write
Visit Sreevarsha's blog where she shares her thoughts about Linda Lee Kane's exciting thriller Black Madonna: A Pope's Deadly Obsession.
https://sreevarshasreejith.blogspot.com/

April 26th @ To Write or Not to Write
Make sure you stop by Sreevarsha's blog again where you can read Linda Lee Kane's fascinating blog post about the anatomy of a thriller.
https://sreevarshasreejith.blogspot.com/

April 27th @ A Day in the Life of Mom
Visit Ashley's blog and check out what she has to say about Linda Lee Kane's exciting historical mystery Black Madonna: A Pope's Deadly Obsession.
https://adayinthelifeofmom.com/

May 2nd @ Author Anthony Avina's Blog
Be sure to stop by Anthony's blog today where you can read his opinion about Linda Lee Kane's exciting historical mystery Black Madonna: A Pope's Deadly Obsession.
https://authoranthonyavinablog.com/

May 4th @ Author Anthony Avina's Blog
May the 4th be with you on this day! Be sure to visit Anthony's blog again where you can read Linda Lee Kane's guest post on the anatomy of a thriller as well as an interview with this incredible author.
https://authoranthonyavinablog.com/

May 6th @ Cassandra's Writing World
Visit Cassandra's blog again where you can read her review of Linda Lee Kane's book Black Madonna: A Pope's Deadly Obsession. Plus you can also enter to win a copy of the book!
https://cassandra-mywritingworld.blogspot.com/ 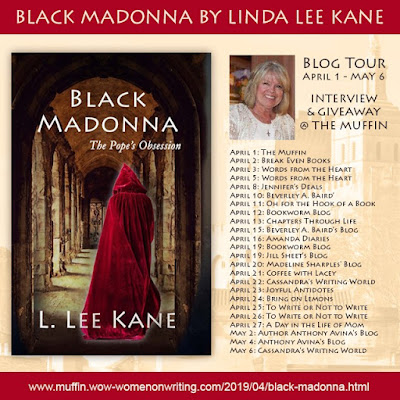