Demon Magic and a Martini #BookBlitz 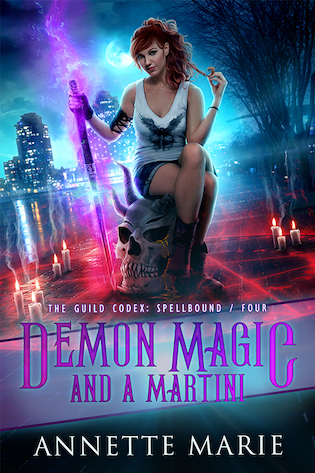 
When I first landed a bartending job at the local guild, I didn’t know a thing about magic. These days, I’m practically an expert on the different magical classes, but there’s one nobody ever talks about: Demonica.
Turns out they have a good reason for that. My guild is strictly hellion-free, because who wants to risk life and limb to control the biggest bullies on the mythic playground?
Well, some people do, and now a demon has been loosed in the city. My three best friends are determined to slay it, but even badass combat mages are critically out-magicked. And that’s not all. The monster they’re tracking—it’s not hiding. It’s not fleeing. It’s not leaving a trail of corpses everywhere it goes.
The demon is hunting too. And in a city full of mythics, it’s searching for deadlier prey.
If we can’t unravel the demon’s sinister motivations, more innocent people will die, but finding the answers means digging into dark secrets … and learning truths I never wanted to know.
—
Note: The three mages are definitely sexy, but this series isn’t a reverse harem. It’s 100% fun, sassy, fast-paced urban fantasy.
—
THE GUILD CODEX: SPELLBOUND
Three Mages and a Margarita (#1)
Dark Arts and a Daiquiri (#2)
Two Witches and a Whiskey (#3)
Demon Magic and a Martini (#4)

Goodreads / Amazon
—
EXCERPT:
“Speaking of worry …” Sin’s eyes narrowed. “I heard all about how you went demon hunting with Aaron, Kai, and Ezra. I have to ask … what the hell were any of you thinking?”
“Um, well—”
“You aren’t combat trained, and demons are the fiercest, deadliest opponents out there! Why would Darius even approve it? You’re all idiots.”
I managed a bleak smile. “Thanks, Sin. Appreciate the vote of confidence.”
She sniffed angrily. “You know you aren’t ready for that, and I’d really prefer my friend not get herself killed.”
Couldn’t argue with her there. I’d also prefer not to get killed.
Lifting the tattered book off her lap, she smacked it down on the bar. “We need to look at options.”
“Uh … options for what?”
“Defensive alchemy.” She cast me a flinty stare. “Since you’re all for the dangerous jobs now, you need to be armed with more than a couple of artifacts. I heard you used a smoke screen. What else did you take?”
Bemusedly, I watched her flip the book open. “Just flash-bang potions. What is that thing?”
“My grimoire. All Arcana mythics have one—where we record all the spells or transmutations we’ve learned or invented.” She turned several spotted, liquid-stained pages covered in handwriting and diagrams. “I can make smoke bombs and flash-bangs easily enough, but you need something to stop an opponent. Personally, I don’t like sleep potions. It’s easy to get it on your own skin and then you’re asleep instead of them.”
“Yeah, that’d be bad.”
She skimmed a few more pages. “Enhanced strength is useful, but it doesn’t last long, and unless you’re in excessively good shape, you’ll crash hard
afterward. Let’s see … amnesia, no. Fasting potion, no. Enhanced speed, no.”
“What’s wrong with speed? I’d like to be faster.”
“It’s hopelessly impractical. Your body gets faster, but your reflexes don’t, so it’s difficult to control without training and practice. You’ll spend the potion’s duration tripping over your own feet and running into things.”
“Oh.” Too bad. “What’s a fasting potion?”
“Drink it and you won’t need food, water, or a bathroom for about forty-eight hours. Good for certain situations, but you pay for it afterward.” She perused more recipes. “Enhanced perception, air buffer, true sight, anti-emotionalizer, allure-fume—none of these are useful.”
“Allure-fume?” I repeated. “What’s that?”
She winced. “Uh, it’s a … um … perfume.”
I stared at her pointedly, waiting for an explanation, and her cheeks turned pink.
“A few drops on the skin will make the wearer especially alluring to the opposite sex. Like pheromones.”
“Why do you know a potion like that?”
“I tried it out when I was younger, okay?” she muttered defensively. “Lesson learned. You don’t have to lecture me.”
“What happened?”
“I wore it on a first date with this guy I really liked.” “Did it work?”
“It worked on him, plus every male who got within twenty feet of me. I spent our entire dinner date pushing random men out of our booth. I’ve never been hit on so many times in one evening. Most of the men were twice my age and married.”
Fighting back a snicker, I asked, “Did you go on a second date with your crush?”
“No.” She hung her head over the grimoire. “An early sign that my love life was doomed.”

Author Bio:
Annette Marie is the author of Amazon best-selling YA urban fantasy series Steel & Stone, its prequel trilogy Spell Weaver, and romantic fantasy trilogy Red Winter. Her first love is fantasy, but fast-paced adventures and tantalizing forbidden romances are her guilty pleasures. She lives in the frozen winter wasteland of Alberta, Canada (okay, it's not quite that bad) with her husband and their furry minion of darkness—sorry, cat—Caesar. When not writing, she can be found elbow-deep in one art project or another while blissfully ignoring all adult responsibilities.