All of My Heart #Blitz #FreeBook 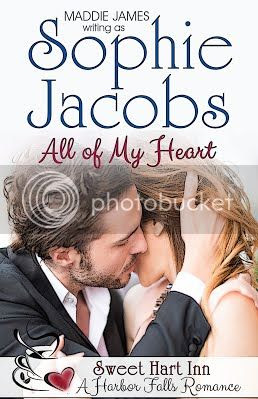 All of My Heart: Sweet Hart Inn (A Harbor Falls Romance Book 1)

When Suzie Hart inherited the lakeside Victorian cottage that would soon become Sweet Hart Inn, she imagined her life all planned out ahead of her. She would run the inn, write her recipes, and pick up an occasional catering job with her cousin Sydney. What she didn't plan on was Brad Matthews.

Suzie Hart has it all. A beautiful home, friends and family, and the sweetest job in the world. She's the best darned cook in Harbor Falls, North Carolina, and has the street cred to prove it. She runs her own bed and breakfast, writes a food blog, and is working on her first cookbook.

Wrong. You see, Suzie has a secret. And when that secret rides up to her doorstep on a bad-ass Harley and tosses her not-so-perfect little world into some kind of big, bad tumble, happy-go-lucky Suzie panics.

Brad Matthews doesn't have a secret, he has a plan--and that plan includes luring Suzie back into his life. When she worked as his sous chef in Asheville, he had no intention of falling in love with the sassy chef, or any woman for that matter. No room in his life for romance. But when Suzie disappeared and took Brad's heart with her, his good intentions shattered. Now that he's found her again, he's not about to let her alter the new path he's set out for his life--and hers.

Suzie hoisted the second twenty-five pound bag of mulch from her wheelbarrow to the ground with a grunt, dropping it next to the stone foundation of her house. There. Ready for her to spread in the morning. The hostas were planted and weeds wouldn’t grow overnight so she’d just make this her Sunday morning chore—after breakfast, that is. She was pooped. Long day. She was now ready for a bubble-bath and that glass of wine.

Standing up straight, she swiped the back of her gloved hand over her forehead. Glancing, toward the west, she watched the sun settle over the mountain, shadowing downtown Harbor Falls a half mile or so in the distance. She loved living on the edge of town, right on the lake. She liked being just so far removed from Harbor Falls’ daily hustle and bustle. If you could call it that. Downtown Harbor Falls boasted of a business district, but nothing compared to the likes of nearby Asheville or other vacation and shopping hot-spots of the Blue Ridge Mountains.

But Harbor Falls was Harbor Falls, small town at its best. No big box stores. No strip malls. Just a busy little downtown. And they liked it, just the way it was.

Life and business, and living in her new-to-her home, were good. She marveled every single day how she’d acquired the quaint Victorian cottage. It was a dream come true. Her aunt’s passing had been unexpected and the fact that she’d left the home to Suzie was even more so. Her father’s oldest sister was the maiden aunt everyone adored, and Suzie missed her terribly. She vowed she would never take owning the home for granted and would always honor her aunt in the highest regard by keeping the home full of love and laughter and children. Aunt Donna so loved children. Since Suzie was the oldest of all of the cousins, her Aunt had doted on her more than the others, and had encouraged her to chase her dreams. Still, she never expected that her aunt would leave the beautiful storybook home to her.

Every day Suzie sent up a prayer of thanks to a higher power who might have assisted in helping move her dream forward.

Sweet Hart Inn was hers. She’d worked hard to convert Aunt Donna’s home into a working bed and breakfast inn, and to renovate the kitchen for her cooking classes and catering. It was also the perfect place to work on her cookbook and write her blog.

Cliff had dumped her, yes. And her sister had done something unthinkable, yes. But secretly she thanked the two of them and held no grudges, because their decisions had forced her hand. When that happened, and when the home was literally dropped into her lap, she’d left the past behind and started making plans on how live her future.

Sweet Hart Inn was the rest of her life. She intended to stay here, run this little bed and breakfast, and do her cooking and writing thing for years to come.

Her gaze spanned the horizon and then settled on the lake. Smiling, she rubbed her hands together to rid them of some dirt and then wiped them on the thighs of her jeans. As dusk settled in, all she wanted was a quiet walk down to the lake for a few moments of silence. Then that long, hot soak in the tub.

With her first few steps, the rumble of a surly engine grew louder down the road, forcing her to turn back. A large motorcycle—one of those bad-boy types—and its rider leaned into the turn and then smoothly made way up the curvy drive to her home. She liked how the bike thundered into her peaceful existence and she wasn’t quite sure why. It was both unexpected and welcome, and that really made no sense at all. Perhaps it provided an edge to the night, a hint of excitement the inn normally didn’t lend at this time of evening.

The rider stopped the bike and abruptly cut off the engine.

Suzie stood spellbound staring at the man and motorcycle. He wore black from head to toe—helmet, leather jacket, hip-hugging tight jeans, and boots. Yes. Bad boy. The man stood silent and unmoving, staring back at her.

She’d expected a guest this evening, a Mr. Logan, and supposed this man could be him. He hadn’t said anything about arriving on a bike—not that her guests were in the habit of indicating the type of transportation they would use to get to the inn.

She stepped forward, again wiping her dirty hands on her pants, silently wishing she’d ended her planting early and showered. She reached out, ready to shake his hand and welcome him and—

Her breath caught in her throat.

The man dismounted, stood straight up, and slipped off his helmet. The steady gaze that met hers and held while he shifted the helmet to his left hip and ran five fingers through his ruffled, curly brown hair, startled her.

An icy panic shot up Suzie’s back and she sucked in a breath and held it. A buzzing noise filled her ears, like a thousand people talking to her all at once. She’d know that finger-rake mannerism anywhere.

Her head spun and Suzie felt herself go a little light-headed.

Brad caught Suzie’s gaze and then watched her body literally fold into itself and fall to the ground. “Shit!” He rushed forward to grab her about the time her temple connected with a rock at the edge of a flower bed. “Suzie!”

His chest pounded. He pulled her onto his lap, fear shaking his arms. “Suzie, darling, hell. I’m sorry I didn’t mean to startle you. Wake up sweetheart.” He caressed her face and cooed soothing words.

Inside he was mortified that he’d caused her to fall and had hurt her.

She moaned and shifted, pushing her palms into his chest. “Wha…” The half-word fell out of her mouth on a breath. “What are…”

“Sh, darling. Oh, Suzette.” Brad glanced about. Where to take her? Inside? To the hospital? He glanced about and noticed a small SUV parked near a back entrance. He supposed it was hers. Were her keys inside? Obviously he couldn’t take her to the hospital on his bike.

“We need to get you somewhere. Have that bump looked at.”

Suzie shifted and huffed out a quick breath. “No, Brad, no…” Then she slumped into his arms again.

Sophie Jacobs writes to silence the people in her head, and she needs two pen names to get the stories down! (If only cloning were so easy.) Whether writing contemporary romance or women’s fiction, she strives to get their stories told. Writing as Maddie James, she pens romance genre fiction from cowboys to suspense. RT Book Reviews says, James “deftly combines romance and suspense,” and Affaire de Couer claims she “has a special talent for traditional romance.” Published in print, ebook, audiobook, and in at least seven languages, Maddie has been listed as a Top 100 Romance Author on Amazon and as an iBooks Rising Star in Western Romance.

Posted by DanielleDuncan at 21:50