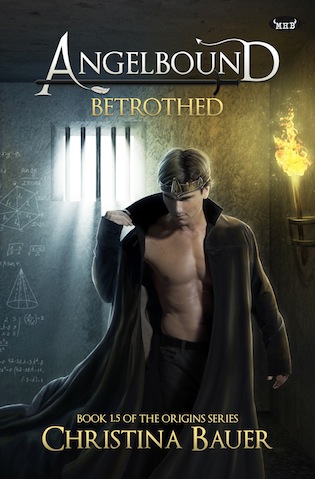 
***An action-packed novella from Prince Lincoln’s point of view***
When it comes to fighting demons, Prince Lincoln is the greatest warrior in the history of his people, the thrax. Now Lincoln faces his hardest fight yet…and it’snot on a traditional battlefield.
Lincoln wants nothing more than to marry Myla Lewis, the part-demon girl who has captured his heart. However, an evil thrax noble—the powerful Earl of Acca—is prepared to do anything to stop Lincoln and Myla from having a future.
But Lincoln won’t give up on his Myla. Ever.
To fight Aldred, Lincoln works to create a different kind of marriage—an Alliance of the lesser thrax houses against Acca. Sadly, just as Lincoln starts to makes some progress, the nobles who’ve joined his Alliance begin to vanish. Is Aldred behind the disappearances, or is someone else vying for power? When Lincoln discovers the truth, it upends his entire world, threatening his future with Myla in ways no one could ever have imagined.

Author Bio:
Christina Bauer knows how to tell stories about kick-ass women. In her best selling Angelbound series, the heroine is a part-demon girl who loves to fight in Purgatory’s Arena and falls in love with a part-angel prince. This young adult best seller has driven more than 500,000 ebook downloads and 9,000 reviews on Goodreads and retailers. The first three books in the series are now available as audiobooks on Audible and iTunes.
Bauer has also told the story of the Women’s March on Washington by leading PR efforts for the Massachusetts Chapter. Her pre-event press release—the only one sent out on a major wire service—resulted in more than 19,000 global impressions and redistribution by over 350 different media entities including the Associated Press.
Christina graduated from Syracuse University’s Newhouse School with BA’s in English along with Television, Radio, and Film Production. She lives in Newton, MA with her husband, son, and semi-insane golden retriever, Ruby.