After being found, inexplicably, standing over a brutal scene involving a pair of recent murder victims, Jade comes to in a hospital with limited memories. Labeled as paranoid by the seedy medical team and locked up, she seems more a victim than a deviant. Promptly drugged and plunged into sleep, she is submerged into a chronic dreamland that seems controlled by another, she soon gives in to a lavish life with a Malum who seems all too eager to see to her every desire. She awakes in yet another reality with no memories of her past, or even herself. Something is making her forget... and just like that she steps into her new life.


Malum is deeply in love with Jade and is only agenda is to give her the world... Or so he claims. Blindly followed by his people, the Luxans, he works tirelessly to keep them safe from the Rebels, with Jade by his side. Surely his motives are pure... yet, the more time Jade spends with him, the further she seems to fall from herself.

All the while, Jade is plagued by vivid dreams of another life... one she struggles to understand while Malum works to make her forget. As Jade struggles to hold onto her soul and discover her past, Malum seeks to possess all that she is. 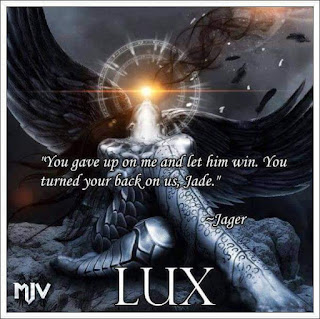 I sense Malum before he speaks, and I can’t help stiffening at his presence. Despite my best efforts, my dreams still cling to me like spider webs — a most unwelcome feeling. “I am relieved to see you awake, Pet,” his voice rumbles from the far side of the bed. His tone matches the floor: icy. I keep my focus on the windowpane opposite me. I am too far away to truly see my reflection or his. But I don’t need to see him to picture the expression on his face —an arrogant mask of indifference. His eyes are always his tell. They will be flashing periodically with anger, lightning to match the thunder in his speech. I let the seconds tick by to see if he continues his lecture, but he says no more. Without warning, he appears out of thin air, before me. From where I sit, my eyes rest on his sculpted chest, but I can see that he is dressed in form-fitting black pants and nothing else. Malum’s bronzed skin glistens with sweat, which is another surprise. We hadn’t been having sex. At least not that I remember. Why on earth is he sweating? Running and training aren’t things he participates in. I allow my crawl up, tracing the lines of his muscles, until I meet his eyes. As expected, his expression is haughty and tight. Anger crackles about him, and I know I must tread carefully. The problem is that I don’t know the exact reason for his anger. My failed mission? Losing to Jager? Visiting the dream reality? I highly doubted he was concerned for my wellbeing. I train my features to stay as neutral as I can make them and wait for the tirade to begin.
Hindsight is twenty-twenty, but little good that does me. Looking back on the situation, I realize it wouldn’t have mattered how I looked at my master.

My punishment is at hand either way. Malum is going to teach me a lesson, a painful one. A lesson I’d never recover from. If I’d just said that one word sooner, I could have avoided the entire situation. But stubbornness and pride got the better of me. Sinner to the core, in more ways than one.
“You failed, Pet.” A clawed hand reaches and gently tucks a stray strand behind my ear. My breath catches in my throat. A clawed hand? My eyes slide sideways to look at the unnatural black claws that are protruding out of my lover’s fingers. I rack my brain for any memory of claws, and none present themselves. Black eyes? Yes. Knives for hands? No. I plead with my heart to calm its frantic pumping, but it does not listen.

“I told you to bring Jager to me. I told you exactly where he would be and how many would be there. I provided you with everything, and yet you come back to me poisoned and delirious. I sucked your poison out, Jade, took it into myself.” Malum hisses the last words, and I dare to glance back at his face. The demon’s eyes are black as I’d seen them while we came together, but now thin lines of crimson trickle throughout. They resemble a field of lava that has partially cooled and hardened. The surface is black, but cracks show where the boiling magma still lies, waiting to be released. I know that once the inferno bubbling within Malum is released, I will be incinerated. Only this time, there will be no pleasure with it. Malum trails his index claw along the side of my face. Applying slight pressure, he forces me to lift my chin as high as I can to keep from being sliced by the razor-sharp talon.

“You’ve ruined my plans and allowed the Rebels to go unscathed with their charge. I needed it killed, Pet. We needed it killed.” He allows his dagger like appendage to rest just under my jaw, at the softest point, where it could sever my flesh easily. “I cannot allow this to go unpunished, Jade, unless you will finally accept my offer.” There it is, the crux of his irritation with me lately. I’d denied him at every turn, and thus far, Malum had been forgiving. I can tell he won’t be any longer.

MJ Vieira resides in Southern Maine with her husband, Alan, son, AJ, and their St. Bernard, Roxy. As a child, she traveled around the state with her parents, seeing the vast history the New England state had to offer as well as touring the nation while showing her American Quarter Horse. While traveling, she read many of the great authors of the time including JRR Tolkien, Stephen King, CS Lewis and Ann Rice. It is these writers combined with power of music, mainly hard rock and folk, MJ draws her inspiration.


In between writing, MJ enjoys reading, collecting music and attending concerts. Lux is the first installment in the Veritas series which is MJ's first published work. 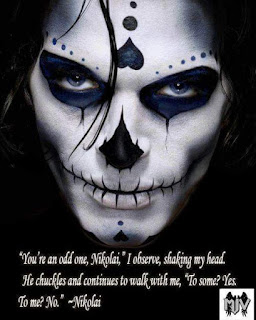