Between Silk and Sand #Excerpt #Interview 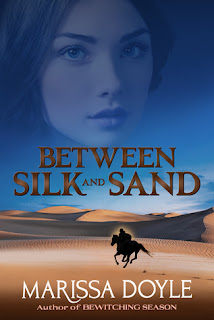 Between Silk and Sand

The best-laid plans, even of princesses, can go awry...very, very awry.


Seventeen-year-old Saraid of Thekla is on her way to marry the ruler of far-off Mauburni. But she’s not sobbing into her silk-curtained litter at the thought of leaving home, because she has plans—and The Book. She’s studied this ancient treatise on the art of kingship for months to make herself the ideal queen for her adopted country. Once her new husband sees that, he’ll fall madly in love with her. It will all be perfect. She knows it.


But The Book is silent on what to do when one’s journey across a cursed desert wasteland is halted by a mysterious young warlord. Cadel has plans of his own—plans that don’t include her going to Mauburni. As she begins to unravel his secrets, Saraid will have to lay aside The Book and trust her own wisdom—and her heart—to navigate the treacherous shoals of politics and power and become the queen she yearns to be.
ebook, 314 pages

Kayn told her, too, about the few—very few—plants and animals they encountered, and a few she was glad they didn’t. Like the scorpion rat, which had scales instead of fur and the female of which had a bite that could be lethal, and the sahrr vine of the northern Adaiha that grew longer than twenty man-lengths and could coil around an unsuspecting victim with stealthy, frightening speed. They discussed books—for someone who had spent his life in the Adaiha, he seemed remarkably well-read. And of course they talked about The Book. He seemed amused by how well she knew it, and liked to test her memory on quotations from it. After a few nights, Saraid realized she’d not felt homesick at all; Kayn’s conversation kept her from missing Thekla too much.
And then eventually they talked about other things.


Saraid wasn’t quite sure how he did it, but something about Kayn—the way he looked at her? his expression?—made her want to tell him all sorts of things. Not specific details about her life, of course, like being the younger daughter of the king of Thekla. But plenty of other things, big and little: from how she missed Mama and what her sister was like, down to hating spiders but liking snakes and going barefooted whenever she could. There was an almost-contradictory freedom in her disguise: Kayn didn’t know who she was, so it felt safe to tell him things that she never told anyone else.


And no one had ever listened to her the way he did, seriously and thoughtfully, as if what she said truly mattered to him. She hadn’t realized how much she’d needed…well, a friend. She certainly couldn’t talk to Talnith or to Captain Zamas the way she could talk to Kayn. Keranieth, she’d barely talked to her sister the way she talked to him. And to her joy, he sometimes teased her—gently and humorously—and she was learning how to tease him back.
Once, a few nights after they’d left the oasis, she’d been seized by doubt. “I’m not boring you, am I?” she asked suddenly, after she’d been talking for rather a long time about Thekla. The Book said that too much speech about oneself was one of the worst forms of selfishness, and she didn’t want Kayn to think her self-absorbed. “I should not talk so much of myself.”
“You are anything but boring me.” He smiled, but there was no laughter in his voice. “I want you to talk of yourself. I want to know everything about Nin trel-Zamas of Thekla. You are exploring my country. Why can’t I explore you?”
She felt sudden heat in her cheeks. “There’s not much to know, despite how much I’ve been talking.”
“I disagree. I think there’s a great deal to know.”
An odd note in his voice made her look up at him. He was frowning at his horse’s ears, an abstracted look on his face. She felt a frisson of fear. He hadn’t guessed, had he? Despite all her talking, she’d been very careful not to give away any clues.
“Why would you possibly want to know everything about me?” She strove to make her tone light.
“‘In learning about others, we learn about ourselves.’” He raised an eyebrow.
She nodded appreciatively. “Beginning of chapter two.”
“Correct. I am learning a great deal about myself, talking to you.”
“Good or bad?”
“Let us say…unexpected. It serves me right, too,” he added under his breath. “Just when I was sure everything was under control…”
She was about to ask him what he meant, but he still wore that abstracted look. Then he looked up at her and smiled, a real smile this time, and it was as if morning had come early. She could almost feel herself melting under the force of that smile, and felt something else inside her, some emotion she wasn’t sure of, burst open like a seedling’s leaves unfurling and breaking through the soil.

What a delight! Loved it. Between Silk and Sand for me has the right amount of everything like the perfect ice-cream Sundae; not too sweet, lots of sprinkles and a little surprise in the centre.

Saraid is a travelling princess. She has left her family home and going to her intended. She is the youngest daughter of the king and is travelling to her future husband. She is doing her duty to help join two nations and bring more prosperity to her people. She even has a book to aid her becoming a perfect wife.

She is travelling across the desert with a small team. A captain, her maid and a small number of soldiers. Unfortunately, the captain doesn't know the land as well as he thought. Luckily they manage to find a guide, a young man by the name of Kayn. Princess Saraid is drawn to him and can't help but get close. He finds her interesting and she likes the attention. Of course, she doesn't tell him who she really is but neither does he.

Saraid's character starts as a naive girl and what she becomes is so much more. She uncovers truths that are both right and wrong. She begins to see colour in a world she saw as black and white.

Kayn is such a loveable character. When Saraid first meets him she sees this, but because of his half-truths, it takes longer for her to see the good in him. There are also some great side characters in this book and even though it's a full story there is potential for more.

I'll be honest when I first read the synopsis and title for this book I thought it was going to be a predictable, easy read with a sweet ending. To an extent it was but it was also so much more. I cared about the characters. I couldn't put the book down and the romance had me swooning. Between silk and sand is well written and has a great storyline.

Highly recommended. 5 stars out of 5. Sign me up for the next one!


Interview with the Author


Question One: What was your inspiration behind this book?
The original inspiration for this story was part of a dream, originally. I don't think any part of the actual dream remains in the story, but it served to kick the whole concept off. I keep a dream journal as well as pen and paper beside my bed at all times, because this isn't the only book I've written that traces its origin to a dream.


Question Two: We first spoke about your book last year and I've read your comments in the acknowledgement section at the back of the book. What took so long for you to write Between Silk and Sand?
It didn't actually take me all that long to write it, originally...but it took years to rewrite, mostly because I was working on other books in the intervening years


Question Three: There are so many great characters in this book. I like the fact everyone has a reason for being where they are. Who is your favourite character and why?
Hmm...I have a couple of favorites. I think Cadel is probably my favorite male character/hero/love interest of everything I've written (barring one other, but his story is still being written so we're not gonna talk about him yet)--I love that he's held onto his essentially sunny nature despite all he's lived through, and I love that he's so darned good at everything, especially being a leader, without ever venturing into hairy-chested, over-bearing, alpha male territory.  I also love Perrin, I think for a lot of the similar reasons--she sees everything so clearly.


Question Four: Can you tell us a little about the geographical difference between Thekla, Mauburi and Adaiha?
Sure--fun question! Thekla is green--a little flat and uninteresting, but full of amazingly bounteous farmland that grows grain and flowers and the trees that support its silk industry. To its east lies the Adaiha, originally a higher plateau region of grassy rolling hills, not as rich and verdant as Thekla but great for grazing animals...until the sand came, turning it into desert with great sandy dunes interspersed with rockier basins. On its eastern border and sloping downward to the sea,  Mauburni is a long, narrow land, and its focus has always been seaward--fishing and trading are its lifeblood.


Question Five: Saraid has a guide book, The flower of Royalty Blossom'd which she refers to throughout the story. What was the idea behind this guide?
There isn't any real-life model for The Book--mostly, it was a way to show Saraid's growth as she went from trying to do everything "by the book" (so to speak) to understanding that while The Book was a useful teacher, she can't rely on it to run her life--that at some point, she has to make her own decisions based on her own experience and observations and circumstances...which can be hard to do.


Question Six: Who would you recommend your story to?
I'm no good at questions like this! Umm, probably people who like a mix of elements in their fantasy--coming of age and romance and new worlds, or people who like fantasy without a lot of overt magical elements controlling the plot? What do you think?

Question Seven: Can we expect a sequel and how long do you think we will have to wait.
Yes, there's definitely a sequel planned--I don't think Saraid could stand it if her story got left without resolving the bigger issues!  As to when--I honestly don't know. I've got a lot of pots simmering on the stove right now. If I hear from a lot of readers wanting to know what happens next, then I'll move this particular pot to a front burner. I have the general story outlined, but stories do have a way of grabbing the steering wheel at times... :)