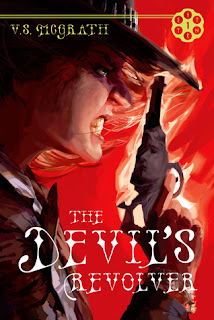 She is Hettie Alabama — unlikely, scarred, single-minded, and blood bound to a revolver forged by a demon.

The first book in an epic, magic-clad series featuring the Wild West reimagined as a crosscultural stereoscope of interdimensional magic and hardship, The Devil’s Revolver opens with a shooting competition and takes off across the landscape after a brutal double murder and kidnapping — to which revenge is the only answer. Hettie Alabama, only seventeen years old, leads her crew of underdogs with her father’s cursed revolver, magicked to take a year off her life each time she fires it. It’s no way for a ranch girl to grow up, but grow up she does, her scars and determination to rescue her vulnerable younger sister deepening with every year of life she loses.

The Devils Revolver is something different than my typical romance read. I fancied something outside the box and this one is definitely unique.

Hettie is living in the Wild West with her family. She isn't a typical cowboys lady and this isn't the typical western tale. In fact, Hettie is better than most cowboys. She has an accurate shot and a fast hand. She doesn't wear the pretty dresses and isn't interested in impressing the men. She wants to beat them at shooting competition and isn't interested in her looks.

Her family have secrets ones that cause trouble. Her sister is kidnapped and Hettie isn't going to give up looking for her without a fight. In a land with magic and bounty hunters, the game is on, but the adventure could be deadly.

Western with magic is an interesting concept. The story is gritty and completely different from anything I've read before.

*I received an ARC in exchange for an honest review as part of the blog tour for book 2.