The impossible has become reality! A masked man possesses extraordinary powers, and he’s using those fantastic abilities to fight crime and pursue justice. Meanwhile, Miranda Thomas expects to fail at the only thing she ever wanted to do: become a famous star of the stage and screen. One night, Miranda encounters a woman who’s more than human. But this powerful woman is dying, fatally wounded by an unknown assailant. Miranda’s next decision propels her life in a new direction—and nothing can prepare her for how she, and the world, will change.

The elevator carriage settled, and Miranda expected to find Officer Hoskins somewhere along the well-lit path, ever vigilant as he stood guard over the park. But once the door opened, she saw only a long, vacant stretch of brick surrounded by topiaries and impenetrable darkness. The park did span several acres around the tower. Perhaps something demanded Hoskins’s attention.
Miranda kept her phone in hand as she began her brisk walk, reminding herself that this was one of the safer parts of town. Still, her parents had issued many warnings about the dangers a city held after dark, and her mind replayed the greatest hits. Miranda felt her ears expanding to catch even the faintest rustling of leaves.
She heard something else. Not leaves or wind or any scurrying critter. Nothing from nature. Nothing natural.
A moan. It was coming from somewhere behind those bushes. Miranda’s senses all dialed up to maximum.
She decided to ignore it and stay on the path, stay under the lights. Keep her eyes on her phone and check the hell out of those text messages. Or pretend to while secretly poised to dial 9-1-1 if the need arose—a need like someone leaping out and strangling her.
Whatever it was, Officer Hoskins was probably already on it. That explained his absence. But what if he was the one moaning?
“I’m hurt,” the moaning person called out from the darkness, her voice hoarse.
It was definitely a woman’s voice, not the policeman’s. And he wasn’t around to respond to the cry for help.
This could have been a trap—some creepy man lurking, sheathed in the dark, ready to throw the first unsuspecting good citizen into a black van. And if not, well, really, what could Miranda do to help? Aside from the simple task of dialing 9-1-1.
It would be the right thing to do, in case someone was suffering. Miranda could make the call and run away.
“Help. Please.”
Miranda wanted to keep walking until she exited the park, but her feet refused to budge and she cringed. She remained physically capable of forward momentum, just not mentally.
Her stomach folded in on itself, threatening to incite debilitating queasiness unless she did the right thing. If she walked away, she’d spend days or weeks dwelling on whatever she walked away from, constantly checking the news for any hints about what the hell this was. All food would lose its appeal, and she would look back on the concept of sleep with nostalgic fondness.
She considered running back up to Ken, but he was nearly half a mile above the ground. And someone right here might be hurt.
Miranda dialed the digits 9-1-1 and positioned her thumb over the “call” icon. Without hitting it just yet, she advanced toward the source of the moaning and commanded herself not to dissolve into a shivering mess of nerves. She did not heed herself. Her shaking thumb almost jabbed “call” by accident.
Didn’t happen, though. A flash of light cut through the park for just a second, and she stopped. Where did it come from? Not the park’s lighting system. Was it … Fantastic Man? Was she about to meet Fantastic Man? This seemed more like something he should handle, not her.
“That was me,” the woman said, each word scraping against Miranda’s ears. So scratchy and parched. She wasn’t far, maybe only a few feet into the darkness. “Want to make sure I … have your attention.”
Without stepping off the path, Miranda dared to look between the bushes. A new source of light flickered low to the ground, revealing a much older woman lying on the grass. The light came from the strange electricity that was cascading over her unusual outfit, which looked like a superhero costume—emerald tights with a scarlet cape. A deep red symbol occupied the center of the chest, the silhouette of a bird’s wing melding into a fierce, sharp beak. The costume lacked a mask, though. But this woman had to be at least fifty, maybe sixty, and Miranda had never seen her before. Surely if an older female superhero had emerged, she would have dominated the news as much as Fantastic Man did, probably more so on account of her unexpected demographic affiliation.
Or was she a supervillain? Was this a trap? Was Miranda stupidly falling into a trap?
The woman was clutching her side, pressing her hand against a dark liquid …
Blood. The super electric woman was wounded to the point where she was bleeding all over the grass. Miranda did not care to stick around to learn who did the wounding, nor did she relish the idea of running away and unwittingly intercepting such a person.
The woman reached toward Miranda with her free hand, which glowed as bright as a standard light bulb, no more intense than that. The electricity never sparked beyond her elbow, so the hand appeared safe.
“Come here,” the woman said. “Help me up. The pain … is too great.”
If she was actually in pain. Miranda started to wonder. The injury seemed real, but the woman almost looked like she was smirking. Miranda’s eyes were still adjusting to the aura of electrical light, though, and she wanted any excuse to get the hell away with a clear conscience.
Paranoia was not an excuse to let someone suffer, so Miranda started to reach for that bright, quivering hand. And paranoia froze her anyway, after only an inch of movement.
“Should I call an ambulance or the police?” Miranda asked, continuing rapidly without pause, “And who are you and where is that electricity coming from? Am I in danger just by standing here? Are you going to kill me? Please don’t kill me.”
The woman chuckled through gritted teeth, as if Miranda had told a joke. “Just grab my hand, dear.” 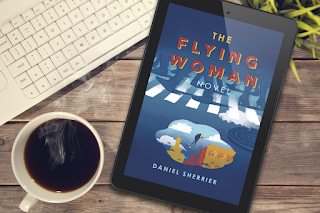 Daniel Sherrier is a writer based in central Virginia. He is the author of the novel "The Flying Woman." A College of William & Mary graduate, he has worked for community newspapers, written a few plays that have been performed, and earned his black belt in Thai kickboxing. And there was that one time he jumped out of an airplane, which was memorable.