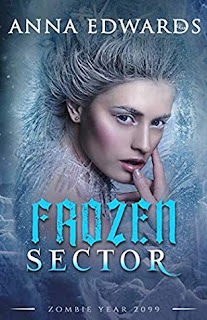 Two lovers, two different missions, both fighting to stay alive in a world ruled by zombies. During the collapse of the Earth, Fraeya, a female elf, was captured by the North Pole zombies. Rott, the head of the zombie pack, bound her magic and forced her to serve him as a slave. She prepares an escape route, but when things don’t go as planned, she’s forced to leave the other women slaves behind. She will have to use all her skills to find a way to restore her magical abilities if she has any hope of completing her mission to find her lover, alone. The North Pole zombies captured and sold Vaegon, a male elf, to a group of wolf shifters living in Mexico. He's struggling with the heat as he farms the land daily to provide food for his owners to sell. Vaegon’s prowess as a fighter is renowned among his people, but his powers aren't at full strength, and he has no idea why.He will have to find a way to restore his fighting abilities if he has any hope of completing his mission of returning home to Greenland and destroying Rott's pack, once and for all. Can Fraeya and Vaegon discover hope in the world they once knew, or will destiny destroy them both, forever?Frozen Sector is the first book in the Zombie World 2099 series; a post apocalyptic world where survival is everything and love may hold the key to the future.

It’s January and I’m still in the festive spirit. I promise this is my last Christmas read. Although, this did come out in January so maybe it doesn’t count.

The Frozen Sector intrigued me from the first teaser. The year is 2099 and the world has been taken over by Zombies. Betrothed elf, Fraeya has been kidnapped by the emery. Magic seems to be on the fritz and Santa is nowhere to be seen. She’s at the mercy of Rott, a zombie who has a thing for flesh. He’s feeding on the people Fraeya wants to protect, while helping himself to whatever he wants from her.

Vaegon is dying from the lack of water and mal nutrient. He’s a slave to a group of shifter wolfs. His future isn’t looking good but he still has the memories of the one he loves.

They have both reached braking point and needs a helping hand. With the bond of love can two elf’s change their fates.

If you are looking for something different this is available on KU and is part of a series. Each sector story is written by a different author and are being realised weekly.

I liked this book. It’s post apocalyptic with themes suitable for an adult audience. Christmas never looked so bad. I needed this. Something outside the box and this was just that.

Posted by DanielleDuncan at 01:35