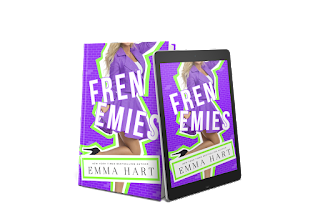 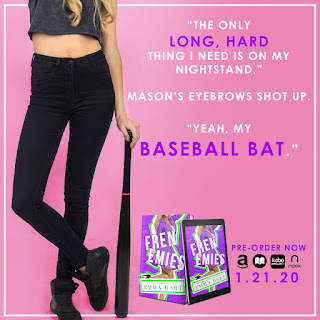 Take a look at this teaser for this sexy single dad romcom coming January 21st from Emma Hart!

“Imogen!” His voice carried up to the open window. “You’re the worst hider ever!”
All right. I was.
I peeked up over the window ledge and peered down at him.
He was not happy.
“Hiya,” I said, wiggling my fingers. “In my defense, I warned you.”
He folded his arms across his chest and glared up at me. “This is it, is it? We’re regressing back to our college years?”
“You started this with the spider.”
“I told you; that wasn’t me.”
“You’re full of shit.”
“You’re lucky you’re up there or I’d toss you on the mess you’ve made of my car.”
“If you try to so much as touch me, I’ll scream and kick you in the balls.”
“You know as well as I do that threat loses its effectiveness after one too many times.”
I paused. “I only did it three times!”
“You didn’t get me once,” he said smugly. “You needed what you were aiming for.”
“Yeah, well that was then, and this is now. The only long, hard thing I need is on my nightstand.”
Mason’s eyebrows shot up.
I grabbed it and hung it out the window. “Yeah, my baseball bat.”
“That’s not what I was expecting.”
“Do you really think I’m going to flash my vibrator to the neighborhood?”
“You may as well, considering you just announced to everyone that you own one.”

There are some things you just have to deal with.
Like your hot as hell college booty call moving in next door with his adorable daughter.

The only time we’ve ever gotten along is under the sheets. Old habits die hard because two minutes on my front porch is how long it takes us to bicker.
Not that a little fact like that bothers my healthy, eighty-year-old grandmother and roommate who’s determined to see me married before she bites the dust.
Unfortunately for me, she’s got her eye set on Cameron Black.
She’s barking up the wrong tree. He’s not The One, no matter how much I swoon when I see him with his daughter. I have no intentions of rekindling anything with him—until a rubber spider in my mailbox starts off the mother of all neighborhood prank wars, just like the ones we had in college, and throws me right into his path.
One that leads right to his bedroom…