Love is a battlefield for a quirky matchmaker and the cocky football star who hires her to find him a wife.

As the owner of Perfect Pairings matchmaking service, Maddie McRae earns her living helping others fall in love. Dubbed the Wedding Whisperer due to her success getting couples down the aisle, the sweet Southern belle knows that the foundation of wedded bliss is built on similarities: opposites might attract, but they don’t stay together.
Which is why she’s holding out for her own Prince Charming, a perfect gentleman who will arrive one day and sweep her off her feet with his devotion, kindness, and charm.
Enter Mason Spark.
Rude, arrogant, and notoriously allergic to monogamy, the hottest quarterback in the NFL is Maddie’s polar opposite. He’s also her new client. Her gorgeous, infuriating new client who’s paying her an outrageous sum of money to find him a wife. With his multi-million dollar contract on the line due to his behavior on and off the field, bad boy Mason is willing to pretend to settle down.
But when he starts to fall for the adorkable matchmaker who can’t stand him, the playboy finds himself in the game of his life to keep something he never thought he’d lose—his heart.

The matchmaker and the difficult client.

Mason needs a wife. Not because he wants a women to love or a family to share his time with. Not because he’s ready to settle down or wants to build a future. Mason wants a wife for his public image. He’s a bad tempered playboy with too much money and not enough emotions. His manger wants to change all that. Dick is like a family member to Mason. He only wants what’s best... and the way to get it, is to trick him into thinking it’s his idea.

Maddie has a new client. He’s difficult, cocky and a pain in the ass. She needs to find him a good match. The problem is he’s undatable. He wants a perfect wife but for show. What he’s going to get is a lesson in the rules of engagement.

This book is funny, witty and swoon-worth. Mason is an arrogant alpha and Maddie is a strong willed female. The combination makes for an interesting read. This is my first book by J. T. Geissinger and I really enjoyed it. The chemistry was good and the story was entertaining.

* I received an ARC in exchange for an honest review. 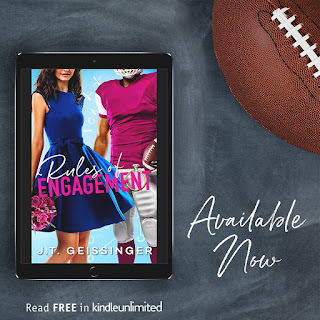 J.T. Geissinger is a bestselling author of emotionally charged romance and women’s fiction. Ranging from funny, feisty rom coms to intense, edgy suspense, her books have sold more than one million copies and been translated into several languages. She is the recipient of the Prism Award for Best First Book, the Golden Quill Award for Best Paranormal/Urban Fantasy, and is a two-time finalist for the RITA® Award from the Romance Writers of America®. She has also been a finalist in the Booksellers’ Best, National Readers’ Choice, and Daphne du Maurier Awards. Her first novel was published in 2012. Since then she’s written eighteen more novels. When she’s not writing, she’s reading, drinking wine, surfing the internet, and daydreaming about all the things she’s going to be when she grows up. She lives near the beach in Los Angeles with her husband and deaf/demented rescue kitty, Ginger.