Essence of the Angels by P.S. Malcolm #Blitz 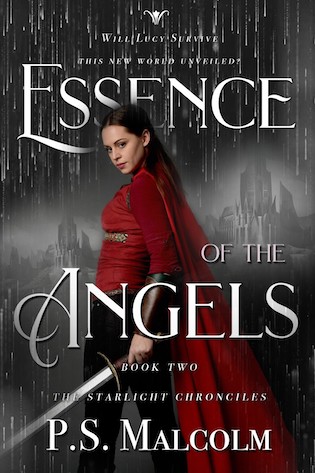 
After the Urenphians take over their home, Lucy and her entourage are forced to retreat to the Angel Sanctuary. But with Valarie missing, Lucy is oblivious to the lies and secrets staring her right in the face. After a shocking revelation, she realizes just how much danger she and her friends are in.
Meanwhile, Valarie finds herself in enemy territory. Her newly found Shadow heritage and ties to Reina aren’t the only dark secrets in her past…she may not make it out of Urenphia the same as she once was…
The exciting next installment in The Starlight Chronicles Series will reveal truths to a world they thought they knew—but will they survive?

Goodreads / Amazon / Barnes & Noble / iBooks / Kobo / Google Play
—
EXCERPT:
When I reached the arena once more, I plucked my coat from the ground and hurriedly put it back on, shivering. Devian caught up to me just as I was heading for the gates. “Where are you going?” he asked, his tone stiffening slightly. I cast him a shadowy look.
“Away from here,” I said thickly. Devian inhaled slowly, then made for me, but I was already turning away and pushing forward. He called out again before I broke into a run.
It was foolish, I know. I would never get away from him. He’d catch up, set guards on me—hell, I wouldn’t make it through a single court on my own. That being said, my heart didn’t sink too much when Devian’s grip locked onto my wrist.
“Valarie,” he said, his voice low. I whipped my gaze back to him, glaring.
“How dare you?” I seethed, my eyes alight with anger. Yanking my arm from his grip, I added, “don’t you ever do something like that to me again!”
“We had to Valarie—the situation is dire, and we needed to be sure—”
I let out an incredulous laugh and stared widely at him. “So having a stranger attack me was the easiest way to see if I could summon magic? Have you ever heard of asking nicely?”
Devian gave me a pointed look. “It wouldn’t have worked. We had to rely on instincts to kick in. You couldn’t have known.”
I took a menacing step towards him and shoved him—just enough to set him off balance.
“You scared me half to death,” I growled. “I thought Stellena had come to kill me…or worse. I thought you were in trouble, and yet, you were behind the whole thing! How am I ever going to trust you again?”
Devian’s face fell, and he went a little white. “You trusted me?”
I let out a single, short laugh. “I won’t make that mistake again,” I said darkly, before turning to leave. He grabbed me again, this time rougher, and pinned me against the side pillars leading to the gates. I flinched, my skin prickling at his tight grip on my upper arms. Suddenly, I didn’t feel as safe as I once had, and a wave of hurt washed through me at the betrayal.
“Let me go,” I said slowly, but my voice had lost its courage. He glared at me.
“Do you think this is easy for me?” he asked, and there was a hint of instability in his even tone. “Do you think I enjoy seeing you unhappy? I know I’ve done some bad things, but I am not a monster.”

Author Bio:
P.S.Malcolm (Pagan) grew up in Proserpine, Queensland-- a small, Australian country town on the edge of the Great Barrier Reef. She was a storyteller from a young age and spent years perfecting her craft.
For two years, she juggled waitressing in tourist filled coffee shops while undertaking two degrees in Creative Writing online. She has always had an interest in writing, but never saw herself working in the industry until she made the choice to self-publish her debut novel, STUCK ON VACATION WITH RYAN RUPERT. Realizing that she loved the process of publishing her book, she pursued an internship at a publishing house and snagged a spot as Pen Name Publishing's Marketing Assistant.
In between interning and writing, Pagan opened her first business working as a freelance Marketing Strategist for Paperback Kingdom-- which helps indie authors with all aspects of their author careers.
Pagan also enjoys reading-- particularly fantasy and paranormal-- and is a passionate blogger. She reviews books that she has read on her personal website, and indie books on her business blog. Some of her favourite and most influential authors include Amanda Gernentz Hanson, A.G. Howard, Marissa Meyer and Michele Jaffe. She is a cat enthusiast, tea lover, and floral fanatic.