Properly, Or Not At All, a spanking short story # blitz #audiobook 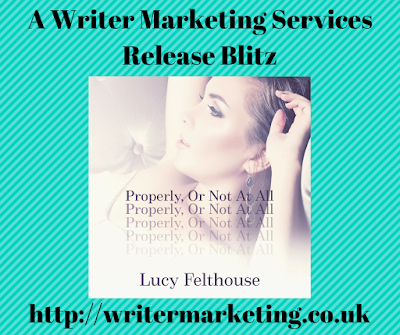 Good news for audiobook fans who love a spanking short story—Properly, Or Not At All is now available to listen, thanks to the amazing talents of Frankie Holland!

Can a husband and wife cope when one of their favourite sexual pastimes is taken away from them?

Tristan and Jayme are not only devoted husband and wife, they are also Dominant and submissive, with a particular penchant for spanking. They’ve been playing delicious kinky games for the fifteen years they’ve been together, and couldn’t be happier. However, when Tristan develops a health issue that means he can’t redden his wife’s backside for a while, it puts them under a lot of strain. It’s a big part of their sex life, and they’ll miss it badly.

They try to find a way around their unfortunate predicament, but in the end, Tristan declares he will either spank Jayme’s bottom properly, or not at all.

The prospect of no spanking at all dismays Jayme, but she has no other choice. Or does she? She continues to put her mind towards the issue and she indulges in some solo experimentation, with mixed results.

But how will Tristan react when he finds out his wife has gone behind his back?
Universal link: http://books2read.com/properlyV2 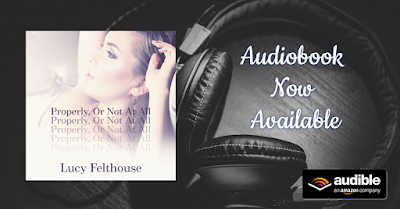 “You know what this fucking means, don’t you?” Tristan snapped, slamming his car keys onto the hall’s side table and storming into the kitchen.

Jayme hurried after him, her heart racing. Tristan rarely got angry—sure, he often pretended she’d done something wrong and faked being pissed off about it when they played D/s scenes, but real anger—it was something that just didn’t happen. She wasn’t quite sure what had sparked it, either. The news had been unfortunate, yes. Inconvenient, yes—but it wasn’t the end of the world. Tristan’s only choice was to follow the doctor’s advice.

“Um, I take it you mean aside from the obvious?” she ventured quietly, not wanting to piss him off even more.

“Yes,” he said on a heavy sigh, making it clear his anger and frustration weren’t aimed at her. “Come here, you.” He held out his arms, and when she went into them, he hugged her tightly and kissed the top of her head. “Fucking hell, Jayme, I’m really going to miss spanking that beautiful arse of yours.”

“And I’m going to miss you doing it,” she murmured into his chest. Then, pulling back so she could make eye contact, continued, “But we’ll cope. There’s loads of other stuff we can do—we can still have fun. As much as I love it, it’s not worth making the problem worse, or screwing up your recovery once you’ve had the op. Your health is more important, babe.”

“Mmm…” came the reply, along with a very displeased expression.

“Hey,” Jayme said sharply, raising her eyebrows, “you might be in charge in the bedroom, mister, but I’m putting my foot down here. Hopefully you’ll get a date through for the operation really soon. And the sooner you have the op, the sooner you’ll be recovered and we can get back to normal. In the meantime,” she grinned widely, “we’ll just have to get creative, won’t we?”

Much to Jayme’s relief, Tristan finally smiled. “You’re right, as always, wife of mine. Clearly I’m not happy about this—fucking carpal tunnel bollocks, spoiling all our fun—but it could be a lot worse, I suppose. At least they’re not operating on my dick.”

“True.” She giggled. “That would take some creativity of epic proportions!”

“It would. So, does this mean we have to have sex more often, then?”

Frowning, Jayme replied, “How do you figure that out?”

“Well, if it’s too risky to spank you, then surely wanking is going to be bad for my wrist, too. And I’m not sure that when the doctor asked if we had any questions, he meant of this nature, did he?”

Jayme laughed again. “No, I’m sure he didn’t. I think we’d have given the poor man a heart attack if we’d started asking him how we were going to get on with our particular kind of sex life without exacerbating your problem. And I was under the impression we already had plenty of sex and that you don’t feel the need to toss yourself off very often.”

“I don’t.” He shrugged. “But you can’t blame a man for trying, can you? Especially when that man’s wife looks like you.”

“No, I suppose not.” She grinned, then slipped her arms around the back of his neck and pulled him in for a kiss. Closing her eyes, Jayme allowed herself to get into the touching of their lips, the parting, the questing tongues, shoving all thoughts of not being able to have her arse reddened to the recesses of her mind. She loved Tristan with all her heart, and their relationship was so much more than sex and kink, so they’d just have to get on with it.

God, yes. The two of them had been together fifteen years, married for thirteen, and were still crazy about each other. What was a little break from spanking in the scheme of things?

Sitting back suddenly as something occurred to her, she said, “Hey, gorgeous. Shall we take this to the bedroom? I’ve had an idea.”

Tristan grabbed her hand and they immediately headed for the bedroom. “Of course. What’s your idea, sweetheart?”

“Well, now,” she replied, grinning wickedly, “that would be telling, wouldn’t it? You’ll just have to wait.”

“Damn,” Tristan muttered, picking up his pace. “I can’t even threaten to punish you unless you tell me.”

After throwing a confused look over his shoulder, he led them up the stairs and into their room before ushering her in and closing the door behind them. “God, you’re gorgeous,” he said, pulling her back into his arms.

“Now, now,” she replied, pushing his chest and wagging a finger at him. “No trying to butter me up just so I’ll cave and tell you what I have in mind.”

Adopting a mock-shocked expression, he said, “Moi? Would I do such a thing?”

“Yes! You bloody would!”

“Yeah, yeah, all right, all right. I totally bloody would. But that doesn’t mean it’s not true. You are gorgeous, and I love you. And I want you.” Gesturing towards the erection that tented his jeans, he gave a wry grin.

“And you’ll have me,” Jayme shot back matter of factly, beginning to remove her clothes. “Now, Sir, could I respectfully ask that you get naked?”
Universal link: http://books2read.com/properlyV2 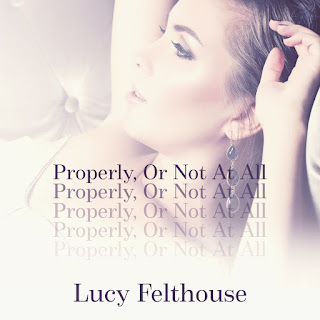