Love in the Suburbs Tour and Giveaway! 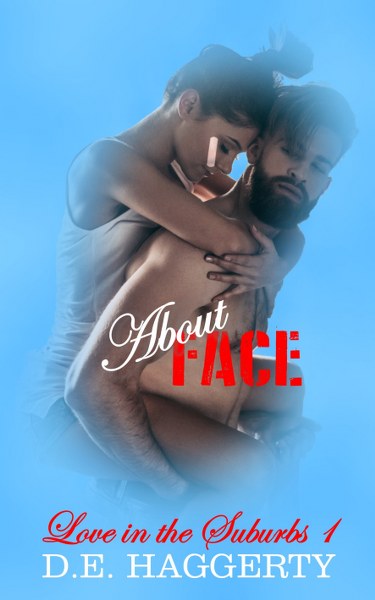 About Face
Love in the Suburbs #1
by D.E. Haggerty
Genre: Romantic Comedy

My grandma is trying to hook me up.

To be painfully specific, my seventy-five-year-old grandmother thinks a little hanky-panky would cheer me up. Direct quote. Since I’m currently living with her, I can’t escape the endless line of grandchildren of friends who keep ‘dropping by’ for dinner. Literally, I can’t escape. I can barely manage the trek to the dining room at this point.

But then I get a brilliant idea. I can fake date my physical therapist. Only he wants a real date. Gulp. A real date with me? Is he for real? I’m no longer the stylish girl with the glamorous job. Now, I’m a woman with a shattered leg and a scarred face.

If I’m going to learn to live with my new reality and give love a chance, my attitude needs to do an about-face. Easier said than done.

“Now, young man.” I chuckle. Bert is not young by anyone’s measure except Grandma’s. Based on his receding hairline and the white tinting his beard, I’m guessing he’s somewhere in his late thirties if not older. “What’s this about you having a girlfriend?”
Bert, who just stuffed a huge portion of pork chop into his mouth, chokes but holds his hand up when Grandma stands and pulls her arm back as if to whack him on the back. He takes a drink of water and manages to swallow his food. “My grandmother Alma doesn’t approve of my relationship.”
“Why not?” Grandma asks as she sits down. “Are you a homosexual? Do you need me to talk to Alma? She should know better in this day and age than to discriminate against you gays.”
Bert starts choking all over again. This time on mere air. When he gets control of himself, he shakes his head. “Um, no. I’m not gay. I have a girlfriend,” he explains making sure to emphasize ‘girl’.
“Why doesn’t she approve of your relationship?” I ask before Grandma can start on some other inane theory.
“My girlfriend is in prison.”
My eyes widen at his answer. I can honestly admit of the dozen scenarios running through my head – drug dealer, too young, single mother – ‘girlfriend in prison’ never entered the realm of possibilities. “What’s she in for?” His lips turn down at my question. “What? Is it not proper etiquette to ask?” Like I care. I will find out what crimes his girlfriend committed.
He shrugs. “I guess I can tell you as you’ll probably never meet Shayla. She was arrested for intent to distribute drugs.”
My mouth gapes open. “Your girlfriend is a drug dealer?”
Bert’s eyes narrow on me. “No, she is not. She has a problem with addiction for which she’s being treated.”
Sure, she’s not. “Does she get treatment in prison?”
“She’s going to NA.”
I nod. NA is better than nothing I guess, although I wouldn’t be surprised if she was ordered to attend NA as part of her sentence. Wow. These blind dates are making me cynical. I take a bite of pork chop as I consider my next question. “How did you two meet?”
“Online.”
“Like online dating before she went to prison or…” I trail off when I see him shaking his head.
“No, I met her on this website for dating prisoners.” There’s a website for dating prisoners? People, who are not in prison purposefully choose to find a prisoner to date? Fascinating. I have to find this website. Maybe his girlfriend is still listed on there.
“But you have met her in person, right?”
“Of course.” Bert smiles. “I drive down to the prison about once a month to visit her.”
I lean forward and whisper. “Can you like touch each other and kiss and stuff when you visit?” Is it rude to ask someone if they can have sex with their prisoner girlfriend at the dinner table? I sneak a peek at Grandma whose mouth is hanging open as she stares at Bert. Okay, probably not best to ask about sex then.
Bert’s face goes nuclear red. Even the tips of his ears are red. It’s kind of adorable. “Not really. But she’s out soon…” The implication is clear. He can’t wait to do the horizontal mumbo jumbo with his prisoner girlfriend.
Grandma clears her throat and stops any further questions of which I have about a gazillion. I’ve never met anyone who dated a prisoner before. I don’t think I even know anyone who’s been to jail, let alone prison. I’m intrigued.
“What about in the meantime?” Grandma asks.
“In the meantime? What do you mean?” Bert asks, but I have a sneaking suspicion where Grandma is
going with this line of inquiry and I don’t like it one bit.
“Don’t you need some female companionship since your girl is … um …. unavailable?”
Oh my god! Is my grandma trying to pimp me out? 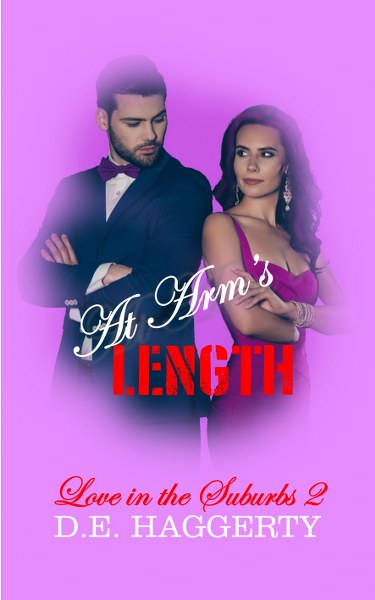 At Arm's Length
Love in the Suburbs #2

Jackson Schmidt is the biggest jerkity jerk ever. They should totally erect a statue to commemorate his jerkityness, jerkdom— Uggh! There are literally not enough words for ‘jerk’ to depict the man.

Unfortunately, Jackson is also the most gorgeous specimen of manhood I’ve ever laid eyes on. One look at him and I want to jump and climb him like a tree. But whenever he opens his mouth, his status as the biggest bastard on the planet is immediately reinstated. It’s impossible for the man to say anything remotely nice – at least not to me. To my best friend, though? To her, he’s Mr. Perfect Gentleman. Did I mention he’s carrying a torch for my engaged best friend?

My libido does not give one flying hoot Jackson is a dick who has a crush on my bestie. Nope. Not at all. No matter how much of a schmuck the man is – and trust me he takes schmuck to the next level – I continue to pant after him like a nerdy freshman crushing on the prom king. If I want to keep my sanity, I’m going to have to keep Jackson at arm’s length.

“Woman, can we have one dinner when we don’t have to deal with your infernal matchmaking,” Frankie’s grandpa growls.
My eyebrows raise of their own accord at his grumbling. Bill is usually a mild-mannered dude, but I guess even the mild-mannered have their limits.
“You’re ruining my fun,” Grandma pouts. Seriously, pouts. She sticks out her bottom lip and flutters her eyelashes at him.
“You can flutter your eyelashes until the cows come home. I stopped falling for that bologna approximately three decades ago.”
“Cuddle-pumpkin, you didn’t have a problem with my eyelash fluttering the other night.”
He grunts. “You were offering something I wanted.”
“Oh my god, are you talking about sex?” Frankie shrieks. “Stop!” She slams her eyes shut and covers her ears. “La la la. My grandparents do not have sex. Nope. Nope. Nope.”
“I’m surprised she didn’t hear us when she lived here. Guess it was a good thing she had those pain pills to put her to sleep,” Grandma remarks.
I choke on the piece of lamb I’m chewing on. Jackson pats my back as he bursts out laughing. “I thought there was nothing that could phase you, babe.”
I take a sip of water. “Oh, I’m not phased.” I smirk when I see Frankie take her fingers out of her ears. “I’m perfectly okay with Grandma and Bill having loud sex.”
Frankie screams and jumps to her feet. “I’m…” She looks around as if the walls will offer her some type of excuse. They don’t. She throws her arms in the air and stomps out of the room.
Bailey watches her leave before turning to me with a grin on her face. “You were right. Sunday meals at Frankie’s grandma’s house are the best.” 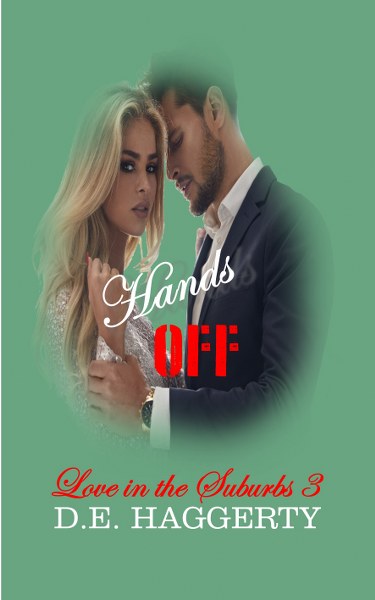 Hands Off
Love in the Suburbs #3

I don’t care how much billionaire Roman Cadwell pushes (and, oh boy, does the sexy man push ALL my buttons), I am not dating him. Especially not when he’s wearing a golden band around his ring finger. I do not get involved with married men. Call it my line in the sand. If a man can’t be faithful, I want not one single thing to do with him.

But what if Roman isn’t really married? What then? No, no, no. I will not fall into Lying McLiarson’s trap.

Only every time the man touches me, my body forgets I’m a good girl and wants to give in. Hands off, Mr. Lying Pants, before I forget I’m a good girl.

Although – no one said I had to be a good girl forever.

Author’s Note: This romantic comedy contains absolutely, positively NO cheating. None. But it does have a whole bunch of witty dialogue and a super sweet happily ever after. And maybe more drama than the author originally intended. What can she say? The characters have minds of their own.

Hands Off is book 3 of the Love in the Suburbs series but can be read as a standalone. 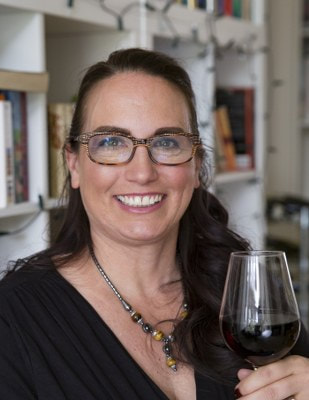 I grew up reading everything I could get my grubby hands on, from my mom's Harlequin romances, to Nancy Drew, to Little Women. When I wasn't flipping pages in a library book, I was penning horrendous poems, writing songs no one should ever sing, or drafting stories which have thankfully been destroyed. College and a stint in the U.S. Army came along, robbing me of free time to write and read, although on the odd occasion I did manage to sneak a book into my rucksack between rolled up socks, MRIs, t-shirts, and cold weather gear. After surviving the army experience, I went back to school and got my law degree. I jumped ship and joined the hubby in the Netherlands before the graduation ceremony could even begin. A few years into my legal career, I was exhausted, fed up, and just plain done. I quit my job and sat down to write a manuscript, which I promptly hid in the attic before returning to the law. But practicing law really wasn’t my thing, so I quit (again!) and went off to Germany to start a B&B. Turns out running a B&B wasn’t my thing either. I polished off that manuscript languishing in the attic before following the husband to Istanbul where I decided to give the whole writer-thing a go. But ten years was too many to stay away from my adopted home. I packed up again and moved to The Hague where, in between tennis matches and failing to save the world, I’m currently working on my next book. I hope I’ll always be working on my next book.