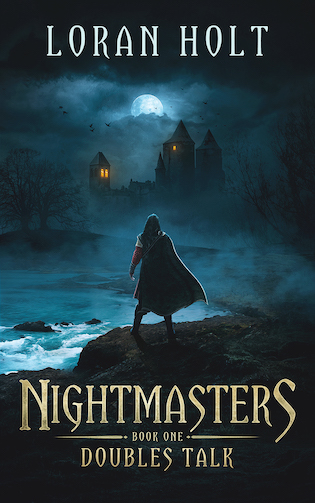 
Kelgan Defthand is used to being top dog at the Academy of Magic where he is Senior Apprentice Mage. Compared to his peers, he’s faster, more skillful, and well aware of it, but when he finds himself beset by fearful voices that come in the night, his confidence is shaken.
Adding to his worries, Kelgan is summoned to the headmaster, Sargal’s presence; it looks like he’s really in trouble. But to his bewilderment, he finds he’s being sent on a “mission” with two very hostile-seeming aristocratic twins, Neroma and Nevander Di Nerrill.
Upon embarking on this mission with the twins, Kelgan soon realizes the world outside the cloistered Academy is a bit different than he imagined. First of all, there seems to be women doing magic! Secondly, he’s not the only one hearing voices.
Following a strange compulsion, Kelgan and the Di Nerrills find themselves seeking out the source of the voices, hoping to put an end to it.
The fateful journey tests Kelgan’s underdeveloped skills to the limit, and could come at an unbearable cost to both to him and his companions. Once Kelgan accepts the challenge of Magehood, there’s no going back. Author Bio:
Recently retired from a job as a University Professor, and looking for diversion in sunny Southern California, Loran Holt did what any Southern Californian does – took up writing, of course. Feeling that sword-and-sorcery suited her personality admirably, she set her sights on that genre. Nightmasters is the result and her first published work of fiction, but she is already the published author of two books on the Silent Film era, with a third on the way.